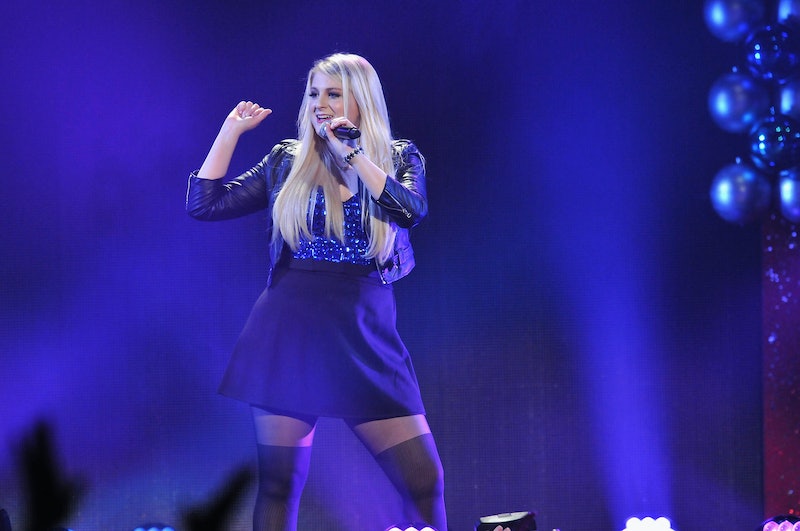 Meghan Trainor is a runaway success story and seems like a really great person. Her smash hit "All About That Bass" has been stuck in just about everyone's heads for weeks now and the music video has gone viral, likely because of the colorful outfits and '80s sound. However, "All About That Bass" has received justified criticism for body shaming that has made Trainor the recipient of several accusations of anti-feminism. As it turns out, those accusations weren't as extreme as you might have thought. According to an interview that she did with Billboard, Trainor doesn't consider herself a feminist.

I don't know about you, but my eyes tend to glaze over with how quickly I tune out of any conversation that contains the phrase "I don't consider myself a feminist." Men and women of every age should be feminists and proud of it, even despite the negative stigma of man-hating and aggressive complaining that the word feminist still can't shake off. So to hear that Trainor counts herself among the many female celebrities who don't seem to realize that they're saying they don't believe women deserve the same rights as men was a huge disappointment, especially within the context of the conversation.

"I don't consider myself a feminist, but I'm down for my first opportunity to say something to the world to be so meaningful," said Trainor, when discussing her interactions with fans via letters and Instagram. "If you asked me, 'What do you want to say?' it would be, 'Love yourself more.'" Sure, preaching body acceptance isn't exclusive to feminism, but opening a discourse on the societal pressure on women to be beautiful and the struggle to accept yourself no matter what is. With how many little girls must look to Trainor as a paragon of self-love, having her tell them that she's not a feminist is crushing.

Quite honestly, there are a lot of things that Trainor has said and done that prove that she's not a feminist icon. However, she has shown more potential than even she realizes.

POSITIVE: She wrote "All About That Bass" to encourage women to love themselves

According to the Billboard interview, Trainor was inspired to write "All About That Bass" by her own insecurities and struggle to overcome them. With lyrics like "every inch of you is perfect from the bottom to the top," Trainor's song is basically an anthem for loving your curves for women who have been told by society that not being a size two means you're not beautiful. At least, that's what she was going for.

PROBLEMATIC: She did so lyrically by saying boys would love them no matter what

However, skinny shaming aside, the way Trainor got her message across was truly problematic. Instead of encouraging women to love their curves simply because they are beautiful, she added that guys went crazy for them. Measuring a woman's self-esteem by how men react to her beauty (or, in this case, her booty) is a toxic idea to push even in a bouncy pop song that's meant to be fun.

POSITIVE: "Dear Future Husband" said she wouldn't be with a guy who wanted a docile housewife

A standout line in Trainor's next single, "Dear Future Husband," said "don't be thinking I'll be home and baking apple pies" because Trainor has her own nine to five job and isn't interested in being a housewife. And, unlike "All Abut That Bass," that line didn't come with a snide remark against actual housewives.

It's basically a list of demands that the husband has to fulfill, including the particularly problematic line "and know we'll never see your family more than mine." It's great to have a song about a woman calling the shots in what she wants out of a perfect relationship, but marginalizing the man's wants and desires isn't what feminism is about.

POSITIVE: She believes that women deserve to be treated better

Trainor said that "Dear Future Husband" was based around the idea that women need to be treated better. "I never got that growing up," Trainor said to Billboard. "In high school, I didn't date awesome dudes." It was well-intentioned of her to make a song proving that women shouldn't be afraid to ask for what they want in a relationship, no matter how extreme or ridiculous.

PROBLEMATIC: She measures her beauty in her ability to get boys

However, in an interview from early September 2014, Trainor said she wasn't "strong" enough to get an eating disorder, because when she tried being anorexic to get a crush's attention she couldn't stop herself from eating. I don't even know where to start with that. I just hope she was joking. Actually, it's not even a funny joke.

VERDICT: Trainor needs to do her research

Honestly, considering the popular conception of feminism, I can't honestly say I'm surprised that Trainor, at 20 years old, doesn't consider herself one. I just believe that she hasn't taken the time to research what the word feminism means. Trainor has a lot of fans who look up to her for her message of self-acceptance — problematically executed though it was — and it would be nice if she did her research before she spoke against the feminism movement so casually. At this point, all we can do is hope that Trainor has a feminist awakening like Taylor Swift, no matter how late in her life it happens.