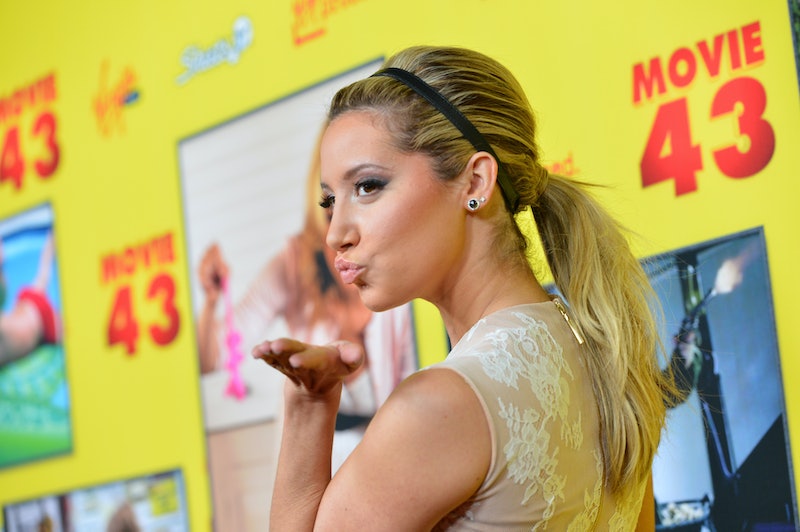 If there's one thing that Ashley Tisdale is, it's hardworking. Tisdale, who got her start on Disney Channel series The Suite Life of Zack and Cody and solidified her place as an iconic star of the network with High School Musical in 2008, has built a career in the industry that many former tween starlets would envy. The actress — who will return to the screen in a leading role with the 2014 sitcom Buzzy's — is currently the executive producer of ABC Family's Young & Hungry, and has recently made her directorial debut. Tisdale worked with Lindt Chocolate on the company's It Started With HELLO web series and directed her very first short for the project, titled "Office Mates." As Tisdale tells me, "I'm excited to do different, new things, and I had never produced a web series before ... so I was excited to be a part of this and blend my experience in producing with it."

The short features a pair of office mates making their "first connection" while goofing off at work. And, of course, it all started with a "hello" — something that the recently married Tisdale can relate to.

Though acting is still Tisdale's "number one passion," she hopes that her time behind the scenes as a producer and now director inspires other actors to give it a shot. Tisdale says that despite her acting inspirations, she does want to prove herself as a producer, which is part of the reason she decided not to take on a larger acting role with her sitcom Young & Hungry. (Another one-time Disney Channel starlet, the born-to-be-on-a-sitcom Emily Osment, has the lead role in the series.)

That's not to say she's giving up on her sitcom aspirations. Quite the contrary — Tisdale will return to the sitcom screen with TBS' Buzzy's, a sitcom about former high school classmates who end up working together in a barbershop. The actress says that she is "itching to get back to a sitcom" and excited about her most "adult role" to date.

No matter what Tisdale is doing, she isn't slowing down for a second. She's come a long way from Sharpay Evans, and it's exciting to see what the future holds for this former starlet. You can watch Tisdale's first foray into directing below: