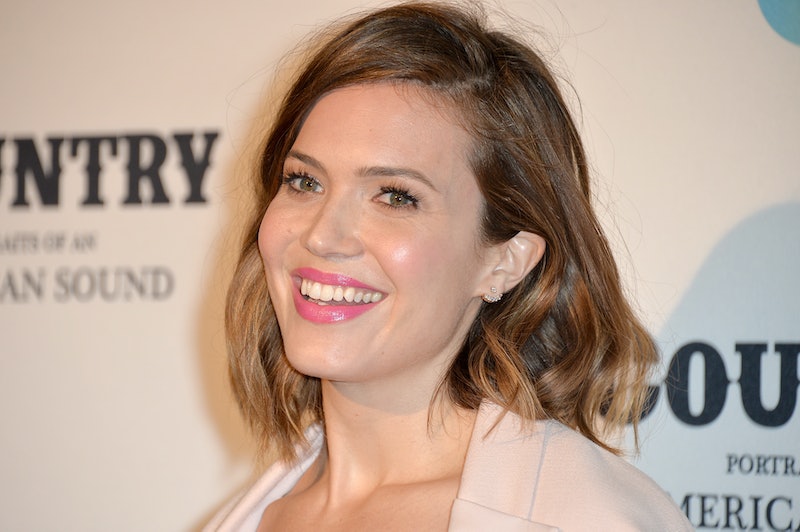 This early 2000s starlet will forever live in my heart. After all, Mandy Moore's roles were always as the perfectly judgy good girl in movies like Saved, A Walk to Remember, and of course, The Princess Diaries. But if you've seen Chasing Liberty or the truly insufferable Because I Said So, you know sister can do some cinematic wrong too. Perhaps that's why she made a shift toward the small screen some time around 2007 and has mostly stuck in that space ever since. And as of two weeks ago, Moore will be returning to TV on Red Band Society, the shoot-for-the-heartstrings YA show, in a recurring guest role.

"I'm playing a doctor...it's that time in my life!" Moore said in an interview with a local Fox affiliate when she was cast as Dr. Jack's (Dave Annabelle) ex-girlfriend. Her character is returning to the children's hospital after time abroad, only to snag the Chief of Staff position... at age 30. Considering most people graduate med school in their late 20s, Moore's character would have to be some sort of Doogie Houser-esque wunderkind, but I'll let it go.

And while Chief of Staff might be a bit of a stretch for her young age, Moore is an actor and she can act like she would be in any feasible position to run the staff of a hospital full of sick children who speak in voiceover when she's only been out of medical school for a max of five years. Luckily, this isn't her first time at the TV rodeo...

Moore hasn't ever played a doctor before, but she's definitely been doctor-adjacent. She had one of the most dramatic patient arcs Grey's Anatomy has ever seen as Mary, a patient who was trapped in Seattle Grace during the big shooting, forced to play dead when the shooter entered her room and shot Dr. Charles Percy, comforted Charles as he died, returned to the hospital six months later for her originally intended surgery while being followed by a camera crew for a documentary about the shooting, never woke up from her anesthesia, and had to be taken off of life support by her husband who was out getting her a pizza when the shooting originally happened. Yeah. Whoa.

I do so love when mousey-haired Mandy Moore plays a bad girl. She was only on HIMYM for one episode, but she made an impression, as I was always a fan of anyone who could take Ted down a peg or two. Moore played Amy, the woman who convinced Ted to get a tattoo on a wild date; but the tattoo artist turned out to be her ex-boyfriend and permanently inked a butterfly on Ted's lower back.

Of course, one of Moore's most notable TV roles was her very first: playing herself on the bro-iest of all shows, Entourage. As Mandy Moore, Mandy Moore played Vince's ex-girlfriend who was the only one his heart still longed for enough to make him stray from his playboy ways. Alas, it couldn't work and the great Mandy + Vince = <3 affair was never heard of again after Season 2.

If you didn't really follow Moore's career when she was a youngster, but have now found yourself in the parenting years of your life (perhaps you're even a Chief of Staff), then you might know Moore from her most current TV role: voicing Sheriff Callie — just the cutest cat sheriff you've ever seen — on Disney Junior's Sheriff Callie's Wild West.

Moore describes Callie as a rootin' tootin' bandit-chasing trouble-solver; I can only hope she'll bring those skills to Red Band Society, as well.