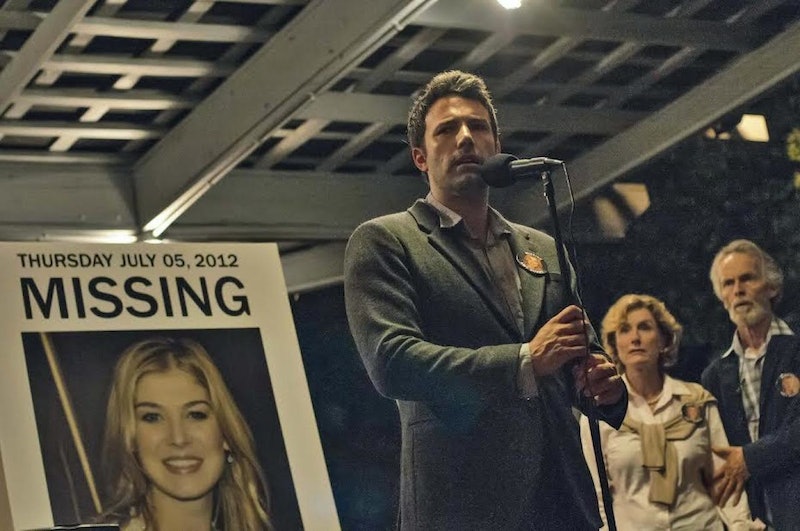 The upcoming release of Gone Girl has everyone talking about whether or not the film will mirror the ending of the book. And while I personally want to see the end stay the same as the book, I know either way the movie will be chilling, creepy, and a total mind f***. And just to confirm that, a few songs off of the Gone Girl soundtrack prove that this movie is going to be a pretty messed up one. The soundtrack was scored by the extremely talented Trent Reznor — who scored the soundtrack to The Social Network and won an Academy Award and Golden Globe award for it — and collaborator Atticus Ross.

Much like The Social Network, another film by director David Fincher, the soundtrack to Gone Girl shares a similar vibe in that the songs feel very dark and ominous, like something bad is looming. Kind of the same feeling you would get from a character in a book being accused of murdering his wife, but not knowing if he actually did it, but all the signs say he did... that kind of looming. The soundtrack already sounds like it could win awards this year, but where in the movie are these songs going to be placed? Let's explore.

I have a feeling this song is going to end up in a lot of moments in the film, but I am confident when I say this song will play in the end of the film's controversial ending. The end of the book was so haunting and honestly really effed up, so I think a calm, peaceful song would really hit the ending out of the park.

"The Way He Looks At Me"

Judging by the name of the track, this will most likely play during an Amy Dunne flashback as she is trying to incriminate her husband Nick (played by Ben Affleck) for her murder.

A scene that will hopefully make it from page to screen is the winter fairytale where Nick and Amy meet in the very beginning of the book. With a name like "Sugar Storm", I think it is pretty safe to say this could be a Winter Wonderland scene before things got... messy, for the Dunnes.

This song feels very scavenger hunt to me. Kind of creepy, but melodic at the same time. I could see it playing during Nick's trip to Hannibal, Missouri, or some type of scene with Ben Affleck driving.