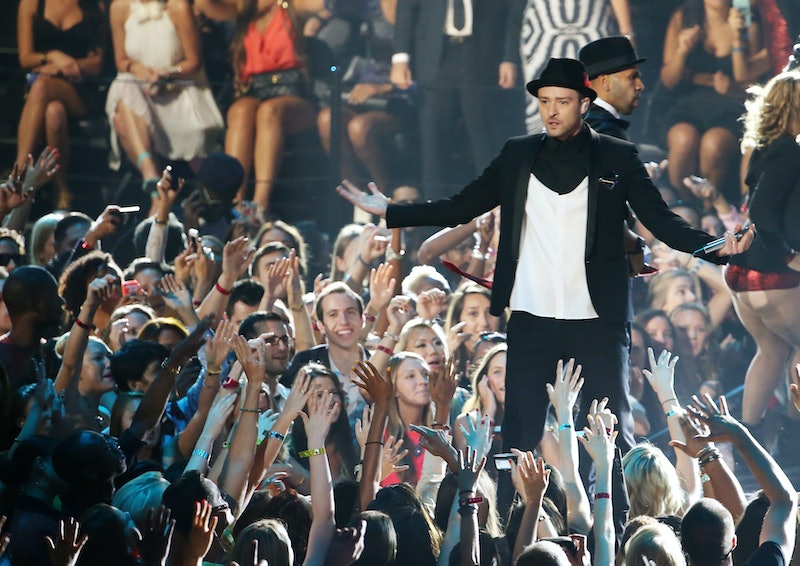 The weeks before the VMAs were chock full of the usual PR pushes: Lady Gaga's general existence, Katy Perry's new single, the 10-year anniversary of the Britney/Madonna kiss, etc. Still, we could only pay attention to one headline: The rumored 'NSYNC reunion set to take place during Justin Timberlake's set.

Timberlake's been in this business long enough to know how to push our buttons: By making us wait. The "Take Back the Night" singer was the recipient of the Michael Jackson Video Vanguard Awards at Sunday's VMAs, making him the recipient of a lifetime achievement award for people too young to get them from the Grammys. And during the performance, Timberlake ran through a lengthy medley to celebrate the honor, performing hits like his most recent single, "Take Back the Night," and some older fare, like "Cry Me a River," "Sexy Back," "Mirror," and... Oh, you know what. We know what you came here for. You came here for 'NSYNC.

Seemingly determined to stress us out for most of his performance, Timberlake had yet to confirm the 'NSYNC reunion prior to the show. America's former boy band obsession had opened a Twitter account the day before the show, so that seemed promising... but, still, would it happen? We worried it might not, especially when Timberlake's set just kept going... and going... and going, with no sign of Lance, JC, Chris, and Joey. Given that Timberlake's only improved as a performer in his years since denim overalls, it was the most enjoyable tease we'd experienced in a long time.

The band did end up making an appearance (albeit a brief one) in the never-ending performance, and we were only reminded of the control the band still holds over our nostalgic hearts. Singing just "Gone" and "Bye Bye Bye," the band quickly fled the building, like a strangely literal reminder of our fleeting youth.

Timberlake remained onstage to finish his medley and to be honored by Jimmy Fallon (who presented the award), looking adorably bashful when appropriate. We just wish there'd been more Joey Fatone.

More like this
Everything To Know About Taylor Swift’s 10th Studio Album, 'Midnights'
By Grace Wehniainen and Jake Viswanath
Kate Bush Revealed The Real Meaning Behind 'Running Up That Hill' Lyrics
By Darshita Goyal
Netflix Reveals First Look At Wednesday In The 'Addams Family' Spinoff Series
By Bustle Editors
'Survivor' Is Finally Coming Back To UK Screens
By El Hunt
Get Even More From Bustle — Sign Up For The Newsletter