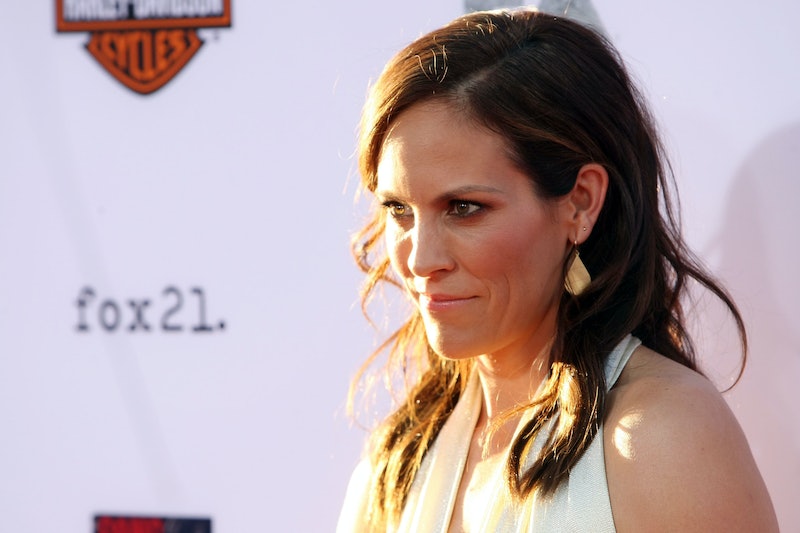 While it may be a biker show centered on legions of power hungry man-children in leather jackets and their various unsavory (and at times porny) pursuits, Sons of Anarchy has always carried with it a few incredible women. For all her faults, Tara was one hell of a surgeon, mother, and partner. Gemma may be a piece of work, and she may make the wrong decisions constantly, but she is a complex, mind-bender of a woman. Even Wendy, Jax's former-addict and baby mama, is never just a former junkie and baby maker. These women are all flawed and strong, yet still vulnerable. You know, like real women are. Entering the ring in 2014 is Annabeth Gish, who plays SOA's new sheriff in town.

And in Tuesday's episode "Playing With Monsters," Gish's Sheriff Jerry shows she can roll with the rough and tumble SAMCRO boys, just like every other killer woman on the FX show. We've seen women on the side of the law — Emmy-nominee C.C.H. Pounder has brilliantly played DA Patterson since Season 6 and Ally Walker gave us the disappointingly catty ADF agent June Stahl until the Season 3 finale — it's incredible to see Gish taking on a role as important as Charming's sheriff as the SAMCRO boys pack it up for SOA's final season. The feds have always been interesting, but it's certainly a pleasant change to see a woman who's a boss (and not only a madame or a porn maven) getting in on the down and dirty politics in Charming.

But Gish probably looks mighty familiar since she's been in approximately 1,000 things since she started her career back in the late '80s. Here are all the places you're most likely to know the seasoned actress from:

In the '90s, Gish stayed a while on the show that once boasted Vince Gilligan as an EP. She played FBI agent Monica Reyes from 2001 to 2002 and not only did her character get to hang out with Agent Scully, she was obsessed with numerology, which isn't something I'm super into, but seems kind of helpful for solving crime and stuff.

She may be great at playing daughters of presidents and enforcers of the law, but to many cult movie fans, Gish will always be Trish from SLC Punk and Heroin Bob's object of affection.

Sure, not many SOA fans also watch Pretty Little Liars, but I watch both shows and while I like to think I'm a spectacular snowflake of a person, there have to be more people like me. You may find the actress familiar because Gish played the Little Liars' psychiatrist, Anne Sullivan. She wasn't wielding guns or chasing down the bad guys, but simply being the voice of reason in Rosewood brought A after the good head doctor. She might actually be safer in Charming, come to think of it.

You guys. How could you not remember that Gish played Julia Roberts' astronomy-loving, pizza-slinging, older man-romancing little sister Kat? Plus, she taught us all the very important lesson that just because you're a great student and the favorite daughter, doesn't mean you can't make big ol' mistakes too.

Clearly, Gish can handle the SAMCRO boys. (And I really hope saying that didn't just damn her.)