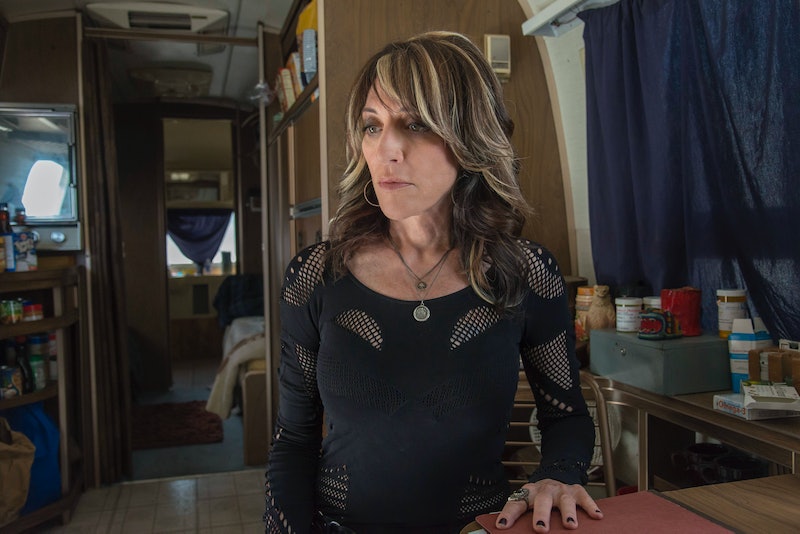 Wow. Is anyone else completely freaked out by Sons of Anarchy's Jax Teller right now? Jax's revenge plan in Season 7 to take down Henry Lin and the rest of his Chinese syndicate in the name of Tara's death is starting to make me question how much I like the new president of SAMCRO because he has seriously snapped. The worst part about Jax's revenge plan is that Tara's real killer is Gemma, his mother, and she's the one leading him down this dark path. So what happens to her when Jax finds out the truth? Will Jax really kill Gemma by SOA's end? It seems like Jax will die by the SOA finale and before he gets the chance to kill his mother. But honestly, even if he had the chance, I don't think he'd actually be able to do the deed. Update: Jax confirmed in Sons of Anarchy's "Suits of Woe" that he will not kill Gemma.

I know, considering his actions right now, I sound a little crazy. Sons of Anarchy has never been shy about murder. And Jax's plan to destroy Lin is as sick as they come. Plus, as we saw in last week's "Toil and Till," Gemma believes that pointing the finger at one member of the Chinese gang as Tara's killer would bring Jax closure. She's either lots her wits or she's just hopped on the crazy train as well — then again, guilt has a funny way of coming out and Gemma definitely guilt for wrongfully killing Tara. But despite all of this, I'm certain Jax wouldn't kill Gemma, even if it would be a way of avenging the love of his life.

But before you all dismiss me as a completely optimistic nut-ball, let me just say one thing: I can't forgive Gemma for killing Tara and her actions in Season 7 to cover up her sin are too much for me to handle. I'm certainly not biased towards Gemma and I wouldn't hate Jax for wanting to kill her. The issue is that I simply don't believe he could actually do it.

Let's think about this. Jax isn't ready to listen to anyone who says Lin isn't the one who ordered Tara's hit. Clearly, he wasn't going to let the young Chinese guy from the Season 7 premiere try to prove his innocence. He taped that man's mouth up and proceeded to torture him and stab him in the head, mirroring Tara's murder. It was horrifying to watch, but after watching the last few minutes of Season 7's second episode "Toil and Till," Jax seems remorseful. Tara would not have wanted this much murder in her name and I think he might be starting to realize this. But he might believe it's much too late to stop now, as Lin will probably eventually figure out Jax is double-crossing him.

If Jax is feeling remorseful of his actions, then should he find out that Tara's murder was his mother's sin, he'd simply be too broken to do anything about it. If Jax is who I think he is, Gemma's reveal would lead him to finally see that his actions are what brought his family to where it is now.

Plus, taking away Tara has already had an effect on both Jax's son Abel and her killer Gemma. When Abel asked Gemma how she knew Tara went to Heaven, she said "because all angels go to Heaven." Even if Gemma breaks down from guilt and tells her son that she killed his wife, he'll have to take into consideration his children being without their grandmother. Then there's everything Gemma has done for him throughout his life and time with SAMCRO. Sure, Jax killed his stepdad Clay at the end of Season 6, but this is his mother. His flesh and blood. He's already lost the love of his life and I don't know if Jax could bear losing his mother too. No matter the circumstances.

I think eventually Gemma will get justice, especially since this show is connected to and often mirrors Shakespeare's Hamlet. If we look at the play, Hamlet can't kill his own mother. Instead, she dies when she drinks poisoned wine that is intended for Hamlet. That points more to the notion that Gemma could take a hit meant for Jax than it does that Jax would be able to kill her.

No matter what happens, Jax will never find closure. That's not an option. His love for Tara was too strong for that to be possible. Even if he destroys Lin's gang and kills him, Jax still won't find solace. And guess what? Killing Gemma wouldn't do the trick either. I'm sure Jax would realize that before killing Gemma — something Tara would not have wanted and something he would regret for the rest of his life.