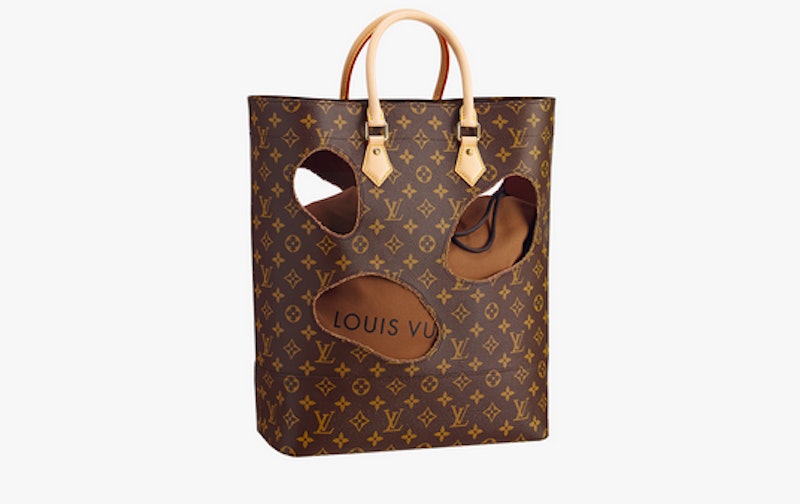 It happens again and again: Just when I've thought I've seen it all when it comes to high-end, crazy designer fashion, something new always comes along and makes me ask, "wait, really?" In the world of fashion, there's always going to be a designer or two dozen who justify totally bizarre things going down the runway by saying that they, like, just wanted to think outside the box, you know? Odds are that when Rei Kawakubo of Comme des Garcons designed a Louis Vuitton bag with giant holes, she may have had a similar thought process. Either that, or she just really likes bags that look like they've been chewed through by rats. Fashionable rats, maybe. But still rats.

Kawakubo is only one "iconoclast" designer in a group of big fashion names who have created unique items for Louis Vuitton. Apparently, according to the Louis Vuitton website, Kawakubo was looking to do something nontraditional for her bag... but in the most basic way you or I could think of.

Well, there you have it, folks. She literally just decided to make holes in a purse. Given that the bag is priced at $2,790, part of me was hoping to hear something a little more, you know, artsy. "I was simply trying to comment on the consumer-obsessed nature of modern society." Or something.

But, no, it's as simple as the fact that the designer just really thought that giant holes in a Louis Vuitton bag would be the best (almost $3,000) version of "something new" that she could think of. It makes you wonder — was the price was made higher or lower because of the holes? Did they take a grand or so off for every slash? Or do the holes actually add to the price because they're, obviously, the fancy kind of purse orifices? These are the existential questions that keep me up at night.

And what happens if things fall through the holes? Car keys? Chanel lipstick? A tiny dog? I have real concerns here, guys.

But to be fair, this is Comme des Garcons x Louis Vuitton we're talking about, and I don't really expect poor old me, who still uses a bag from Forever 21 occasionally, to fully understand the impact of the hole-y purse. But, come on guys, it's ultimately just $2,790 worth of holes and Louis Vuitton logo. Let's think this one over.