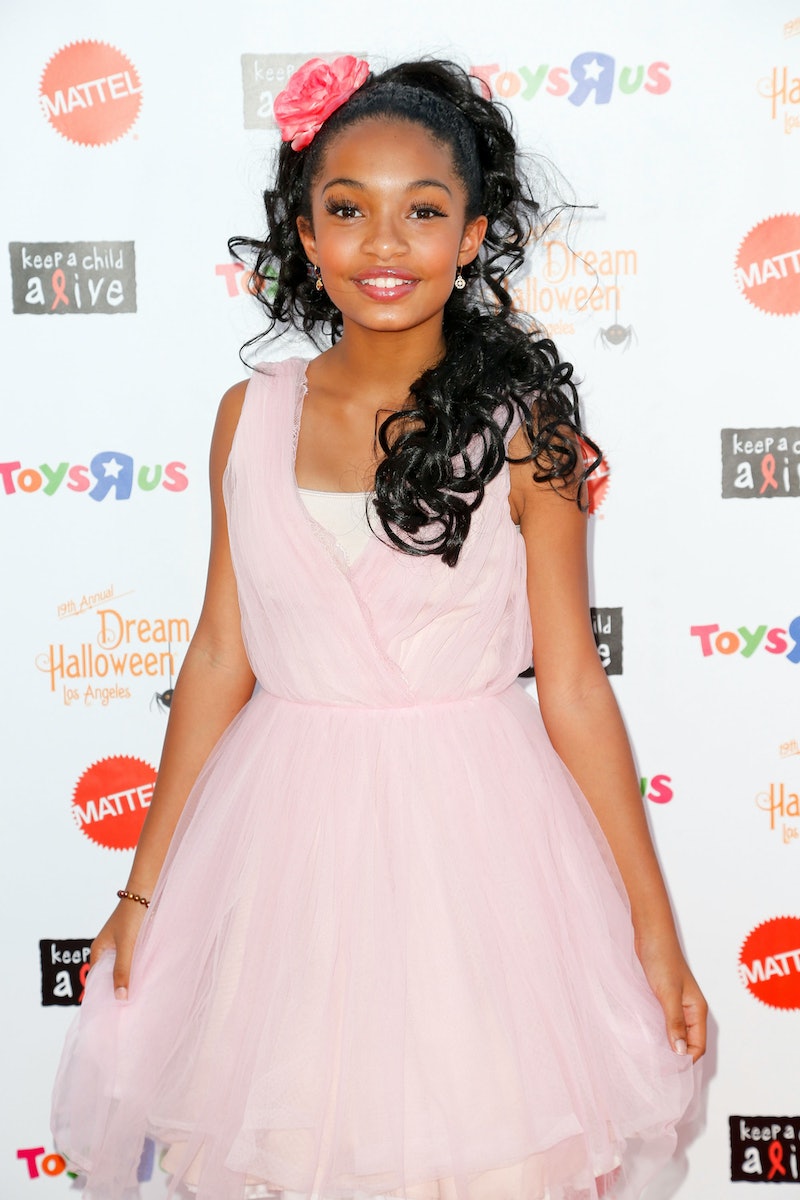 At 14 years old, Yara Shahidi is set to star in the new ABC comedy series Black-ish , which premieres Wednesday. Shahidi plays Zoey Johnson, the daughter of Tracee Ellis Ross' and Anthony Anderson's characters. Excuse the cliche, but despite being only 14, this is not Shahidi's first shot in television shows or movies. If she looks at all familiar to you, it's because she's appeared on a variety of different programs from Bad Teacher to The Fosters, and even did an episode of Wizards of Waverly Place. (Now wondering whether or not she's pals with Selena Gomez, to boot.) However, the pre-teen actress is most well known for playing a young version of Kerry Washington's character on the hit series Scandal.

She really enjoyed her experience playing a younger Olivia Pope. Shahidi told Madame Noire that Washington made a special trip to her school, which was apparently nowhere near where she was filming that day, just to pop in and say "hello." She told the mag:

It was amazing. The audition was literally me walking into a room and being myself on camera ... Everyone on set was so nice and I got to work with some amazing actors and actresses, which was fabulous. And at the end of the day, Kerry Washington walked into my school, while I was in school even though she wasn’t shooting near it, and came just to say hi. She’s honestly the nicest person ever.

And Washington isn't Shahidi's first brush with a celebrity, either. She happens to be related to rapper Nas. What are the odds?

Now that her role on Scandal is done, she can focus on black-ish, on which she plays a character who seems to be the opposite of her. In the same interview, Shahidi explains her character:

Zoey, she’s popular, she’s smart, she’s witty — all of that ... But the one thing is that she really loves Instagram and texting friends. She’s a very social person in that way. Because of that, she’s usually on her phone. But she has a really big personality. She’s really colorblind, which is definitely a good thing, but she’s so caught up in social media that she’s kind of lost a piece of her culture. She’s kind of a lost cause and he [Anthony Anderson] constantly tries to get her involved.

Sounds like the perfect next step for Young Olivia Pope, don't you think?

More like this
Netflix Reveals First Look At Wednesday In The 'Addams Family' Spinoff Series
By Bustle Editors
24 Years Ago, 'Friends' Dropped Its Most Underrated Ross & Rachel Episode
By Grace Wehniainen
Lindsay Lohan & Jonathan Bennett Celebrated Mean Girls Day Very Differently
By Jake Viswanath
Twitter Is Unravelling Over Wolverine’s Return For 'Deadpool 3'
By Darshita Goyal
Get Even More From Bustle — Sign Up For The Newsletter