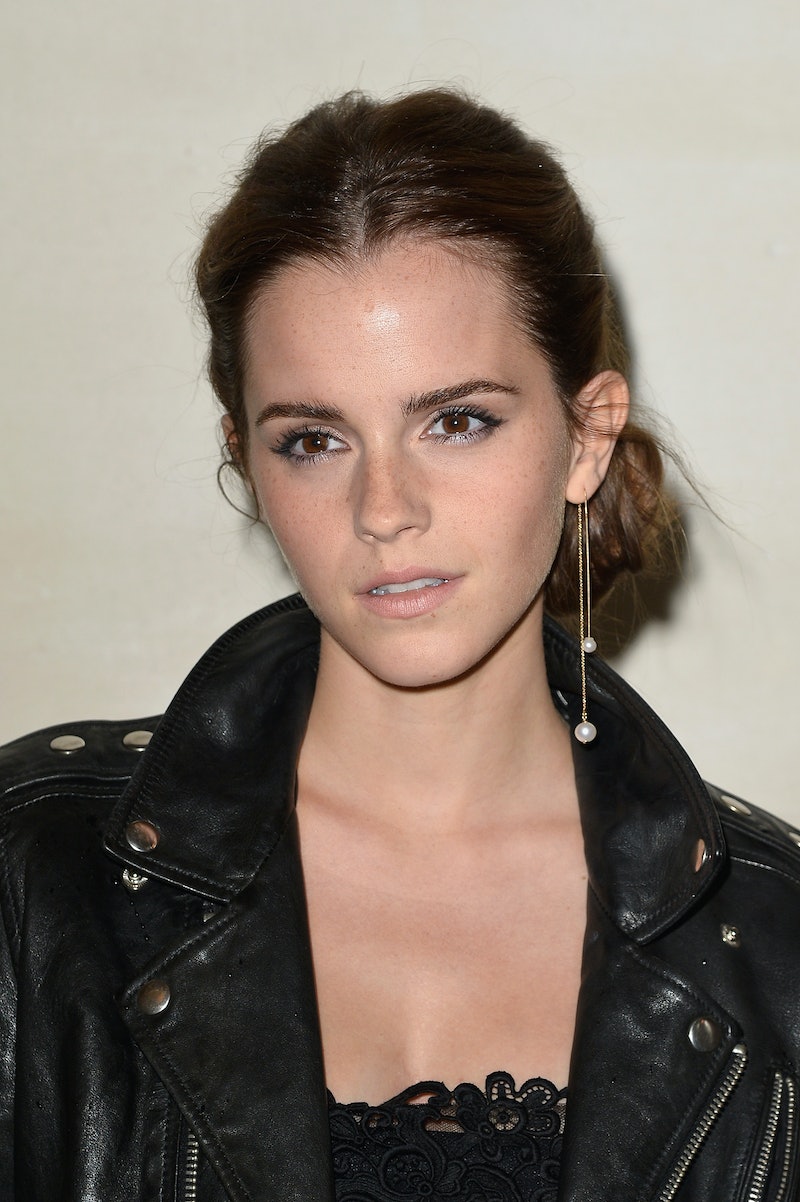 Get ready for the Internet to literally break your brain. In absolutely bizarre news, it turns out Emma Watson is the target of another hoax. Or is she? It's unclear. To catch you up on your Watson news, Watson became an international hero after her powerful speech on behalf of the He For She campaign, inviting men to feel as welcome in the feminism movement as women do. However, less than a week after her speech Watson was threatened with a nude photo hacking scandal — and by threatened I mean an anonymous 4chan user actually threatened to leak her nudes because she is a woman and was doing that annoying talking thing women do. However, The Washington Post reports that the Watson nude photo scandal was a hoax, but the nature of the hoax is still unclear.

Originally, the 4chan user had gone as far as to create a website called emmayouarenext where there was a countdown clock to the date that Watson's nude pictures would be leaked. However, if you click on that website as of Wednesday morning, you are automatically transferred to rantic.com for something called Rantic Marketing, where a message reveals that the Watson scandal was all a marketing strategy to get 4chan shut down. According to the site, Rantic is a social media marketing company founded by Brad Cockingham and a frequent participant in "viral campaigns and music videos".

There's even a letter to President Obama on the front page, urging the president to censor the Internet on behalf of the celebrity publicists who hired Rantic to bring this issue to Obama's attention. By threatening to leak nude photos of Watson and allowing remarks like "that feminist bitch Emma is going to show the world she is as much of a whore as any woman", apparently. Because that makes sense. However, if you're confused already then prepare to get even more confused. Because, according to Business Insider, Rantic Marketing isn't even a real thing.

"Rantic Marketing is a fake company run by a gang of prolific internet spammers used to quickly capitalize on internet trends for page views. The group go by a variety of different names," said Business Insider. "Collectively, they’re known as SocialVEVO, but as the Daily Dot reports, their names are alleged to include Jacob Povolotski, Yasha Swag, Swenzy and Joey B. The only known video footage of the group is a rap song about pickles that they used dubious spam techniques to make incredibly popular."

So, apparently the threat to leak nude photos of Watson to get her to stop making feminist speeches was a hoax to draw President Obama's attention to the issue of Internet privacy invasions. However, the revelation of the hoax was in and of itself a hoax. So... what does that all mean? Are there going to be pictures leaked of Watson or not? Was the original thread for real or not? If it was just being used as a means of showing how depraved 4chan users can be, then why was it deleted instead of documented on the Rantic Marketing site? And if Rantic Marketing is a hoax, then what was the point?

That seems to be the most important question to have about all of this. What was the point? The disgusting level of misogyny leveled at Watson in the alleged 4chan thread was truly horrifying and taking the attention away from her He For She speech for a hoax like this was not only bad timing but also sick. And if the hoax wasn't a "marketing strategy" and is instead a gang of prolific internet spammers having fun and collecting page views, then what was the point of doing something so disgusting and elaborate? I understand that spammers don't necessarily try to make sense, but there's a difference between not making sense and this.

If the end goal here is to get 4chan shut down, then the strategy is probably going to backfire. The backlash and outrage over the discussion and threats about Watson in the wake of her He For She speech make it clear that people won't be very forgiving of targeting Watson in that way, no matter what the ultimate intention. If the end goal here was just to mess with people and capitalize on a trend, then it certainly worked. About the only thing we can really be happy about here is that it seems that there will be no photos of Watson leaked at all, which means her privacy is being protected and respected. Everything else is one big, frustrating ball of confusion.

Sorry Brad Cockingham and Rantic Marketing. If you actually exist, then whatever you were trying to do fell really, really flat. If you don't exist, then I guess everyone can just get a good laugh out of the name Cockingham and the phrase "hoax within a hoax" and then move on with their lives. The Internet is a truly terrifying and bewildering place, you guys.