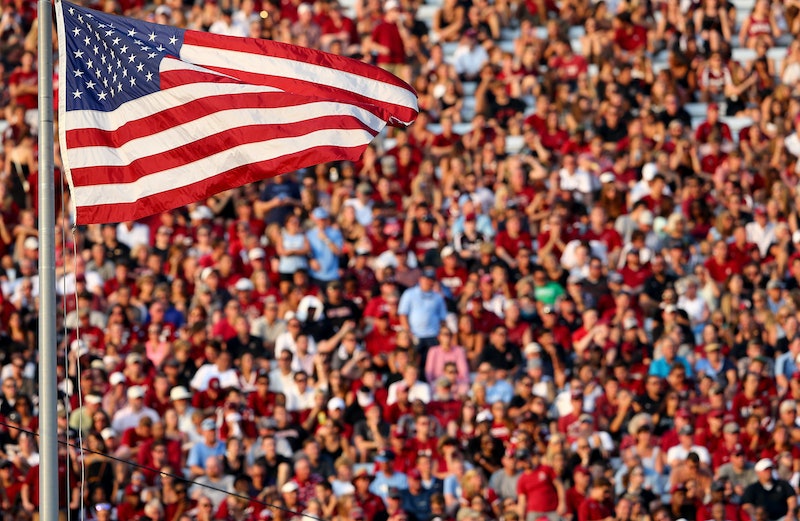 As if history isn't already taught with enough bias, Colorado's Jefferson County School District wants to change its American history curriculum to make it more patriotic. This would mean the curriculum would be censored to "promote patriotic material, respect for authority, and the free-market system," according to The Denver Post and leave out important protests, revolutions, criticisms of problematic presidential administrations, and so much more of the history and strife that's so important to understanding the history and state of our country. 1984 much? The measure has not been voted on yet.

Luckily, Colorado students are more sensible than their administrators. The Associated Press reports that students were skipping class for demonstrations and protests organized via social media to oppose the curriculum change. The Associated Press says "many waved American flags and carried signs, including messages that read 'There is nothing more patriotic than protest.'"

AP reports that Julie Williams, a conservative member of the board, previously told school news website Chalkbeat Colorado: "There are things we may not be proud of as Americans, but we shouldn't be encouraging our kids to think that America is a bad place."

This wouldn't be the first injustice to occur in history classrooms in the United States. Most people know that the majority of world maps we see are a lie — they're often very eurocentric and distort the sizes of countries and continents to favor wealthy places. Christopher Columbus didn't actually discover America, Abraham Lincoln wasn't actually as opposed to slavery as everyone thinks, and Native Americans were not barbaric primitives. Hopefully, this ridiculous Colorado curriculum won't be implemented, because instead of teaching more lies, we should work on eliminating the ones we already tell.