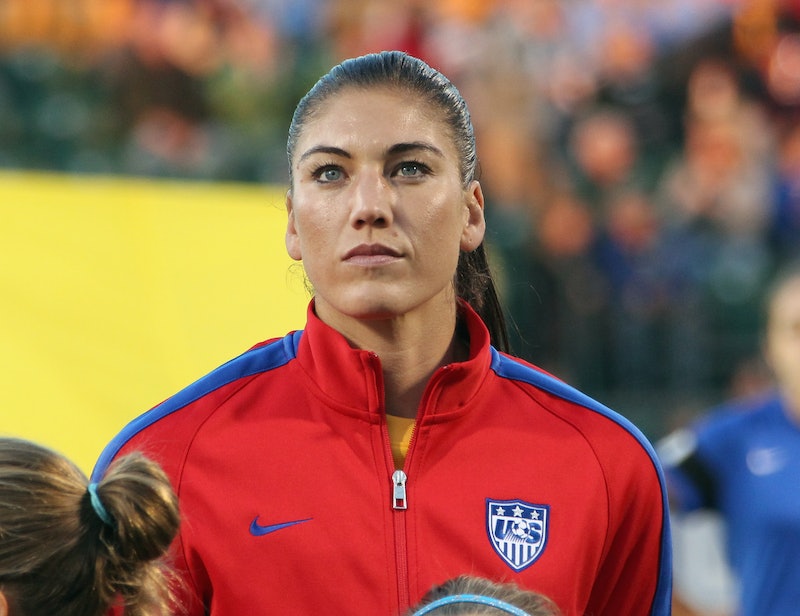 While I have to say that I appreciate everything Hope Solo says in her response to the most recent celebrity nude photo leak that involved her private photos and that of other female celebrities like Kim Kardashian being posted publicly online, it's a bit strange that her statement regarding that is meshed with a statement also addressing recent domestic violence allegations she's facing as well. Both are important topics that need to be addressed, of course, but her statement may have held more strength if they'd stood alone and each focused on their respective situations. After all, the subject matters greatly differ — and the situation involving the private, nude photos of countless female celebrities being stolen and posted online without their consent has been overshadowed and brushed aside by people enough as it is.

That said, though, Solo does make a good point about how the privacy of all women involved in this situation has been violated beyond belief. In a statement posted to her personal Facebook, Solo wrote:

It is extremely sad and unfortunate that the rights of so many women were violated by the unauthorized release of private photographs. This act goes beyond the bounds of human decency and, as such, I stand united with all the women affected and am exploring every option to protect my privacy.

In the same post, Solo then addresses domestic violence allegations that were brought up against her in June, in which she was accused of hitting her sister and 17-year-old nephew (she has, for the record, pled not guilty to these charges):

In addition, while I understand that the public desires more information regarding the allegations against me, I continue to maintain my innocence against these charges. And, once all the facts come to light and the legal process is concluded, I am confident that I will be fully exonerated.

Obviously, no matter what charges have been brought up against her, she does not (nor does anyone else, ever) deserve to have had her private photos stolen from her, and posted publicly. That should be a given. However, meshing the two topics just takes away from the strength of the point Solo is making about privacy, which is a point that no one should be distracted from — especially now.