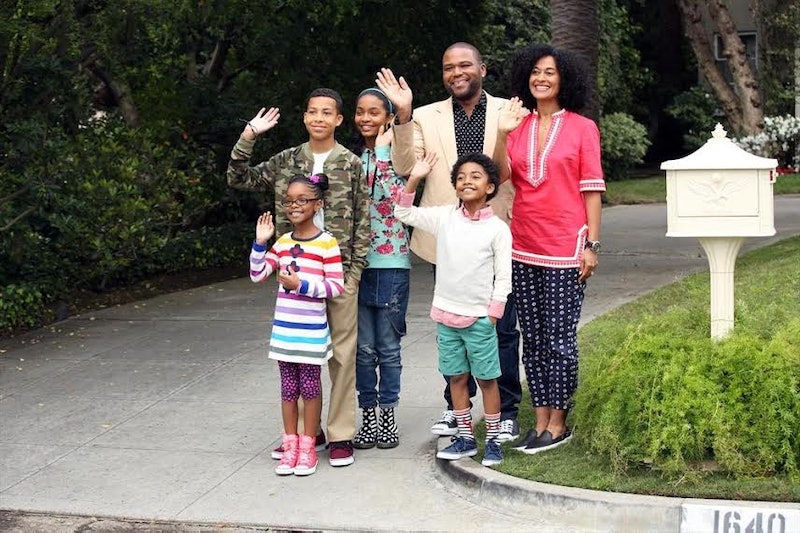 I have this problem a lot when I watch TV shows or movies. How can you fully separate the character that the actor is playing from the actor themselves, or how can you fully separate a concept represented in a show from the writer who wrote it? My friend will tell you that I hate Matt Damon because he played an asshole character on some obscure episode of Entourage, and he's right. I do hate Matt Damon for that reason. I know that's stupid. My apologies to Matt Damon, but this is the same sort of logic I brought into the season premiere of ABC's new series black-ish (which is currently streaming early online). Between the trailer and other pieces of promotional material I thought to myself, "Am I supposed to be applauding this modern-day minstrel show?" I went into watching the premiere thinking black-ish would be offensive and a complete regression, but now that I've seen it, I think that there's a possibility that black-ish could open the door for more shows like it in primetime television.

When the pilot starts, Anthony Anderson's character — "Dre" Johnson if you're Black or White and he likes you, "Andre" if you're White and he doesn't like you — makes a variety of jokes about his wife's ( Girlfriends star Tracee Ellis Ross) lighter skin tone. He refers to her as "pigment challenged" and "not even Black," two phrases that from my perspective would be grounds for termination of said marriage. This running joke in the show plays on a sort of colorism that has trounced relations between lighter- and darker-skinned people of African descent for years. Upon hearing the first mention of Anderson's character's colorism, I almost completely wrote the show off as garbage.

But why did that small minute detail make me so defensive? It's because I wasn't separating the character's ideas from the writers' and the actors'. Just because Anthony Anderson spoke those words, that doesn't mean he believes them. In the same way, just because something is told as a "joke" in the world of the show, that doesn't mean that black-ish writers actually support the idea.

If you suspend the fact that Andre Anderson's character is saying offensive things to his wife and focus on the purpose (bringing the issue of "Blackness" into question), you'll see that his character actually represents a large part of the collective Black conscious, those striving to maintain "Blackness."

It's something I believe lots of minority groups deal with, and one aspect of the show that makes this not just "a Black show." The emotions that the characters feel are real and the intent of Andre's quest to preserve Black culture for himself and his family is noble, something many minorities deal with on a daily basis. Is Andre's mission a tad misguided? Absolutely. But Andre's well-meaning fumbles actually bring into question what "Blackness" really means, and that's where black-ish finds some very interesting ground to tread.

One prominent fumble is showcased in a scene in the premiere episode in which Anderson's character Dre throws his son an African "coming of age" ceremony. "This ain't our culture. We Black, not African. The Africans don't even like us... You'd be better off watching Roots," says Dre's own father (Lawrence Fishburne).

And that's another way black-ish succeeds. Fishburne as Pops, the curmudgeonly old grandfather, plays a sort of Greek chorus for the non-Black audience members, giving them little hidden insights into what things going on in the show mean on a racial level that may go right over someone's head. When Dre is promoted to Senior Vice President of the Urban Division at his firm, Pops is not impressed. "You finally made it, son," he says, "to head puppet of the White man."

All that considered, do I think the show is perfect? By no means. In fact, at first I thought it leaned too hard on the tropes of being Black in America that Blacks in America know all too well from being, you know, Black in America. But, because black-ish appeals to really anyone who enjoys comedy thanks to its key asset — humor, of course — Blacks aren't the only target demographic. And that's why black-ish is so necessary in the television landscape.

In 23 years of life, I have been asked countless times to speak as a representative of my entire race, just as Dre's co-worker asked Dre to do. And I'm sure we have all collectively rolled our eyes together when friends or co-workers have asked similarly frustrating and offensive questions. So why does it work on this ABC show? Well, the reason black-ish can toy with this notion without crossing into offensive territory (especially when Dre's boss asks him to really put his "swag" on a presentation he has to give and reminds him to "keep it real") is again, that all-important tool: humor. Regardless of race or skin color, the audience is brought into this experience through the use of comedy, because the writers spell out that the situation is plainly absurd. How could we not notice how ridiculous Dre's co-worker is being? Not only is the show making us laugh, but it does so while shedding light on the racism that still exists.

Still, the simple fact is that race and class are difficult subjects and that tackling them in a series almost begs to be told in comedy. When you throw a little humor in, people start to loosen up a bit — much like when Jon Stewart and Stephen Colbert covered Ferguson on their news-comedy shows. Some people need a spoonful of sugar to help the medicine go down. (I think Mary Poppins taught me that.)

It's something the show's creator Kenya Barris discussed in a recent interview with Vulture:

I think that we have the advantage of being able to have you look at something that you might otherwise not want to look at, but look at it and laugh. And sort of make it more palatable ‘cause of that.

This gives black-ish an advantage over the more serious 12 Years A Slave type movies and shows of the world, which the interviewer John Horn acknowledged:

One of the problems... is that you can have a great movie like 12 Years a Slave — that came out last year — any number of Oscar voters, some of whom voted for it for Best Picture, admitted they didn’t want to watch it ... It was too difficult. They didn’t want to go there. So, you can have a drama that’s very tough and very realistic and very authentic, and it can scare people so much that they won’t even engage in the story.

So while it's easy to write black-ish off without even watching the first episode, it's certainly worth giving a try. The show tackles some tough topics, but ultimately the multi-layered, multi-faceted, witty, absurd, and sobering series is a must-see.

A series like this — one that mixes humor with the intent to broach hard subjects like race and class in an approachable and accessible way — hasn't existed on primetime television before now. Barris, the incredibly talented cast, and ABC should be proud for bringing this show into being, for defying my expectations, and hopefully, for jumpstarting an important conversation, too.

More like this
Watch The Thrilling Teaser Trailer Of 'Shadow And Bone' Season 2
By Gretchen Smail, Jack Irvin and Sophie McEvoy
Stormzy Made A Passionate Speech About The Importance Of Diversity
By El Hunt
Pro Footballer Zander Murray Is "Blown Away" By Support After Coming Out
By Sam Ramsden
Bustle Daily Newsletter: October 4, 2022
By Hayley Schueneman
Get Even More From Bustle — Sign Up For The Newsletter