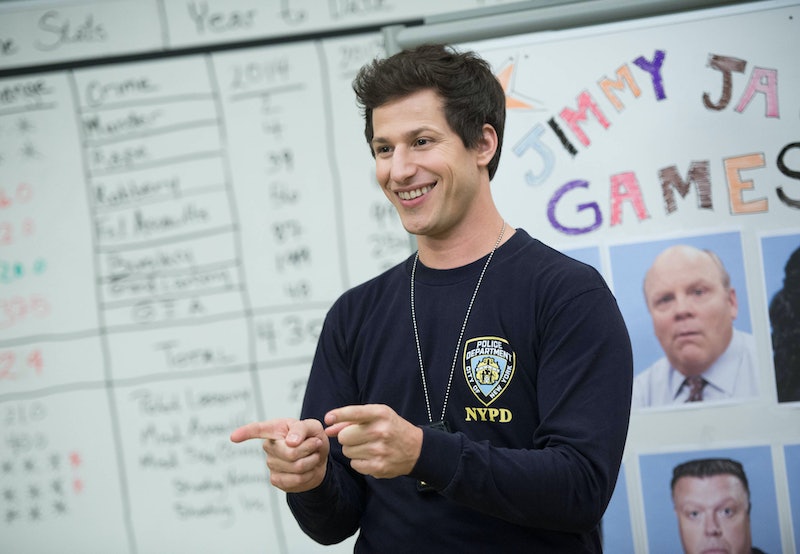 Do you love watching Jake Peralta's antics but still don't understand why Brooklyn Nine-Nine was moved to Sundays? The show was well-loved on Fox's Tuesday comedy block! Andy Samberg won a Golden Globe. The show also won a Golden Globe. It's a refreshing new show with diversity that actually reflects our world. What a concept! Last season's finale also left us with a ton of comedy cliffhangers — how cool is a comedy cliffhanger? Jake's going undercover? Jake said what to Amy? Gina and Boyle did what?! I'm psyched that I don't have to wait until Tuesday, but that doesn't mean everyone will be able to revisit the NYPD's 99th precinct the moment the show returns. But don't worry, if you forgot about the schedule change and made plans, I'm here to tell you how to watch the Brooklyn Nine-Nine premiere if you can't catch it live, or don't have a TV to watch it on.

Plus, I'm not sure everyone is going to be able to adjust to a Sunday night sitcom lifestyle. Especially with Family Guy sandwiched between Brooklyn Nine-Nine and Fox's new sitcom, Mulaney. No disrespect to fans of the Griffin family, but I still haven't decided what I'm going to do during that half hour. It's good to have options. Never fear, detectives. There are plenty of ways to watch this kooky workplace comedy after the second season premiere this Sunday, Sept. 28. You won't even have to wear a tie.

It's standard cop procedure to start at the scene of the crime (series) — which would be the Fox website. Don't have cable? No biggie. Episodes will go online at the Fox site the day after they air. Do have cable? Dance it out with Gina's dance troupe, "Floorgasm"! You can connect to your cable provider and watch online or download the FoxNow app and get episodes streaming on your devices.

Line Up Episodes on Hulu

If you've shelled out the dough for a Hulu Plus subscription, the premiere will be waiting for you on Monday morning. If you're using regular Hulu, that's cool, but get ready for a whole lot of numbers. New episodes will be available eight days after air, and and certain cable providers will allow you to connect to your Hulu account and access new episodes the day after they air at no extra cost. Connecting to your cable provider will also allow you to access the last five episodes at a time. Go ahead and check. Comcast and Time Warner Cable are not yet participating.

Place Your Bets On Demand

If you have cable but don't have a DVR, probably the easiest way to watch Brooklyn Nine-Nine is by finding the On Demand channels or menu on your TV. You may be able to search for it. You may need to find the "Primetime" section or channel and navigate to Fox. However you access it, episodes will be posted the next day. Just don't go Full Boyle!

Don't worry Little Mermaid, you can always buy episodes on Google Play, Amazon, and iTunes. It may get costly, but you'll thank yourself the next time you're bored while traveling. If you can't wait to get your fix for free, clips are sure to show up on Youtube and the best jokes are bound to become gifsets on Tumblr.