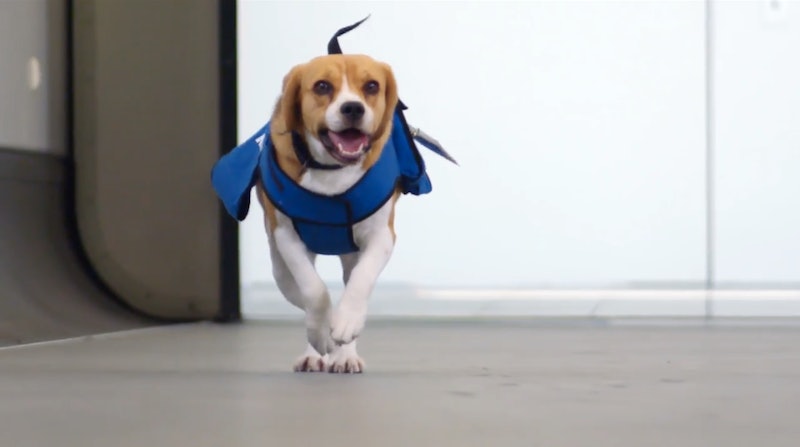 Here's a heart-warming story to take your mind off all the recent NFL/fraternity/ISIS news: A dog at the Amsterdam airport is helping passengers find all their lost items. Sherlock is an adorable beagle who runs through Amsterdam Airport Schiphol, returning fallen items to their rightful owners. Cellphones, toothbrushes, teddy bears — you name it, Sherlock has it. And he does it all while proudly wearing a little royal blue vest.

Sherlock is a member of Royal Dutch Airlines' Lost and Found team, a new program that helps passengers reunite with their cherished possessions. It's a pretty brilliant idea: All Sherlock has to do is sniff the lost item, and then run through the airport, searching for its owner. Meanwhile, the human members of the Lost and Found team monitor social media to track down passengers, and also use passenger data such as seat numbers and cellphone numbers.

"Our main goal is to return lost items to the owner as fast as possible," Lost and Found team member Sandra List says in the airline's official video.

According to Royal Dutch Airlines, the Lost and Found team has successfully returned 80 percent of the lost items to their owners. It's unclear how much of that was due to Sherlock and his impeccable sniffing abilities, but judging from the airline's video, he looks like he's got this whole search-and-return thing down.

"Personally I think he is a real asset to the company," Royal Dutch airlines employee Chantal Kremer says in the video. "And he can really do something no one else can."

According to Sherlock's trainer Dirk van Driel, the passengers love seeing the sight of the lively beagle running toward them with their cellphone in paw. But of course, the passengers most happy about receiving a visit from Sherlock tend to be the flight's youngest passengers.

"When you see the reactions of the passengers that really is amazing," van Driel says.

Here are some more photos of the amazing Sherlock in action...