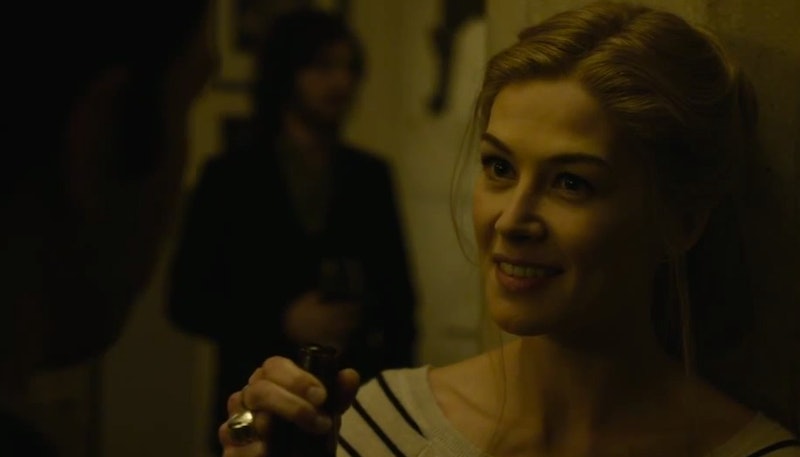 Not-spoiler Alert: The marriage of Amy Dunne and Nick Dunne ends really, really badly. Within the first thirty seconds of any Gone Girl trailer, you discover that the entire film is about Amy going missing and Nick being the prime suspect in her disappearance and possible murder. However, the Dunnes were married for years before the plot kicks off, so it should come as no surprise that we would flash back to the happier times. That's what the first official clip from Gone Girl does: flashes us back to happier times, specifically the happier time when Nick and Amy first met. Whereas most of the Gone Girl promotion has been kind of creepy, like that Amy Dunne Pinterest wall that gave us all the heebie-jeebies, this 30 second clip was super adorable. Which is what made it creepy. We all know how this ends.

In their first meeting, Nick approaches Amy at a party and asks her about herself. Amy responds by giving him multiple choices on what it is that she does for a living, inviting him to either get it right or pick which one he wants it to be. We can't really be sure, when it comes to this kind of educational flirting. Nick easily passes this test and volleys back a flirtatious line of his own that, to be honest, would totally work on me. And not just because he looks like Ben Affleck. That was just smooth.

This clip makes it even more tragic that Nick and Amy's relationship goes south to the point that it's a genuine question as to whether or not Nick kidnapped and murdered her and it makes you wonder how these two, who already seem like the cutest cute to ever have cuted, could have gone so wrong so fast. Then again, the clip does it's job, because now anyone who wasn't interested in seeing Gone Girl is probably going to check it out just to see what happened between the clip and the start of the plot.

As the rest of us know, the answer to that is nothing good. Check out the clip below.