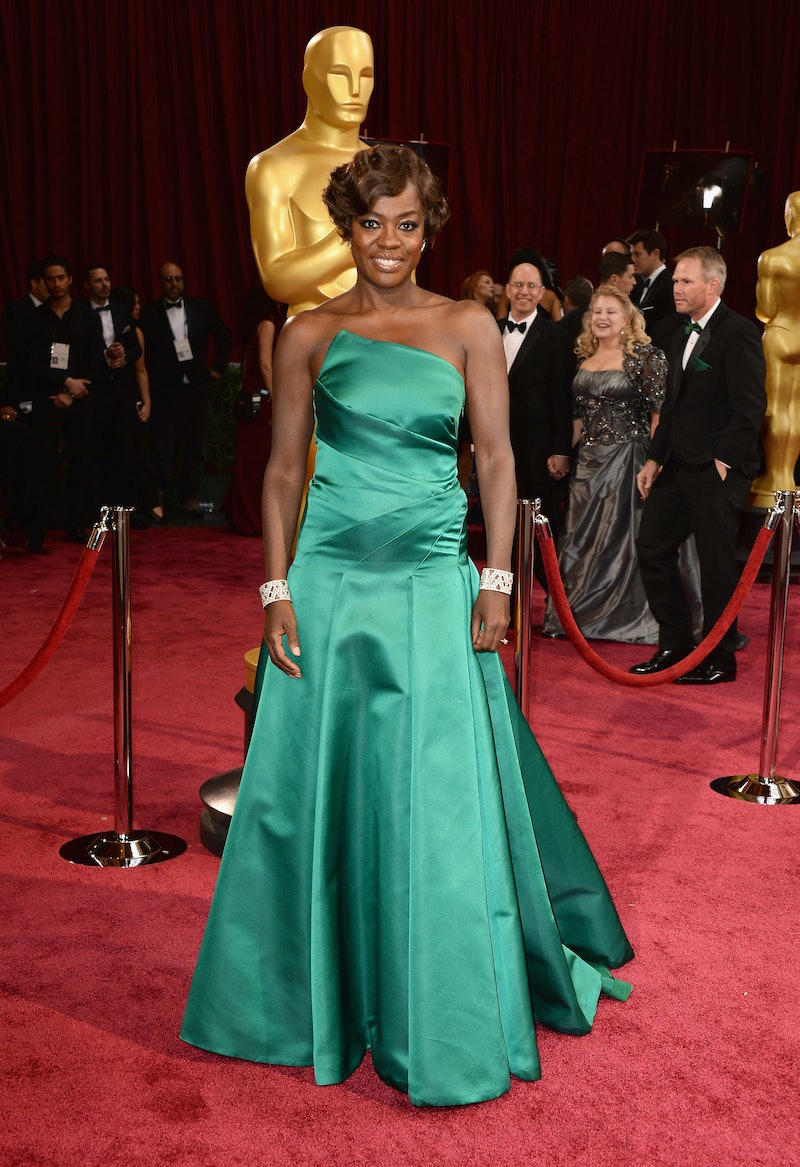 What do Leonardo DiCaprio and Viola Davis have in common? Neither of them have won an Oscar, though they've been nominated multiple times and turned in worthy performances. But when an artist's work is not acknowledged by the Hollywood elite, aka The Academy, as being worthy of more than a nomination, that doesn't discredit the work. We all know that. And that goes doubly for actors and actresses like Dicaprio and Davis, who are given the opportunity to deliver powerhouse performances without the clout of an Academy Award. And with the premiere of Viola Davis' new role on How To Get Away With Murder, the actress is making it clear that she's not playing around anymore.

Davis has appeared on over 20 television series and in over 30 feature length films, two of which saw her nominated for Academy Awards: her 2008 role in Doubt and her 2011 role in The Help. But still no Oscar for this talented actress. And it's a damn shame.

Still, there's a chance that How To Get Away With Murder could be Davis' lucky charm for gold, even if it's Emmy gold. We've already seen the Television Academy give Scandal's Kerry Washington a nod for her work as Olivia Pope, and Rhimes has an incredible success rate. And if my instincts are right, How To Get Away With Murder will be Rhimes' greatest series yet. The show promises sex, lies, betrayal, boundaries being pushed, and, wait for it: MURDER! (I know, you didn't see that last one coming, but seriously.) The show's cast is stacked with a few newcomers and some old faces, beyond the not-so-secret weapon: Davis herself.

Alongside Davis are capable actors Matt McGorry (the sexy guard from Orange is the New Black), Jack Falahee (from ABC Family's Twisted), and Alfred Enoch (Dean Thomas from Harry Potter and also the star of a lot of my fantasies), to name a few.

And while Shondaland devotees are probably sure that Scandal or Grey's Anatomy are the more worthy shows, they've never been for me. But How to Get Away With Murder is speaking my language. Not only is Rhimes killing it on TV, with Davis on her side, she might just be able to actually get away with anything. OK, maybe not murder. But a lot of other things.

More like this
The BBC Is Adapting A Best-Selling Novel About A Mistaken Killer
By Darshita Goyal
Devi Is Going To Meet A “Smoldering Bad Boy” In ‘Never Have I Ever’ Season 4
By Jack Irvin and Gabrielle Bondi
UK Viewers Will Have To Wait To Watch The Handmaid’s Tale S5
By Maxine Harrison
15 Offensive AF Jokes In 'Friends' That Really Aren't OK
By Tolly Wright, Bustle Editors and Meguire Hennes
Get Even More From Bustle — Sign Up For The Newsletter