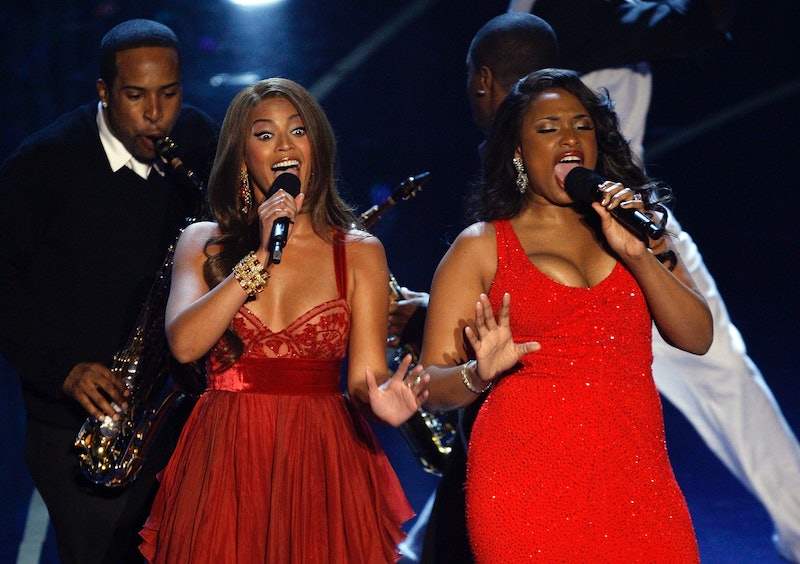 When Dreamgirls wrapped, people began trying to pit Beyoncé and Jennifer Hudson against each other. Dreamgirls was initially thought to be a star vehicle for Beyoncé's acting career, and yes, Beyoncé was praised for her performance and her commitment to her role, but it was Hudson who ultimately stole the spotlight. Both women were nominated for Golden Globes and contributed vocals to the film’s soundtrack, but Hudson was the one who ended up with an Oscar, and Beyoncé's acting career has not exactly taken off. Still, there's are no issues between Jennifer Hudson and Beyoncé, and Hudson elaborated on this when she appeared on What What Happens Live Wednesday night.

Jennifer Hudson talked about the advice Beyoncé gave her on the Dreamgirls set saying, "I just remember her telling me, 'You have such an amazing start. Like, no one gets this opportunity.'" And she wasn't wrong, Dreamgirls was a major catalyst pushing Hudson into super stardom. She added, "Anytime Beyoncé or Destiny's Child does something, I have parties. I always see it." Hudson keeps up with all the latest Beyoncé performances, including her HBO documentary with Jay Z for the On the Run Tour. I guess stars really are just like us, fanning out for Beyoncé's award show appearances, Instagram posts, and personal rumors.

Like most people, Hudson is clearly a Beyoncé stan, but do they actually get along? Yes, they do. Apparently they keep in touch and hung out as recently as September.

With both women working in film and music, there are bound to be comparisons. This is especially true since they are both so talented. Comparisons aside, there is no beef between the two singers. In a plot similar to Dreamgirls, the press and fans stirred up drama between the two artists with rumors of jealously and shade being thrown. However, this is far from true, and there is nothing but love between the R&B sensations.

Almost every single day there is a new headline about pop stars feuding, specifically the female ones, so it's very refreshing to hear about these two stars getting along both privately and publicly. The feuds are particularly unnecessary when the stars are pitted against each other by the media, not by anything they actually did, so it's nice to hear Hudson speak out like this and put the rumors to rest. The world's music stage is definitely big enough for all the stars to shine brightly.