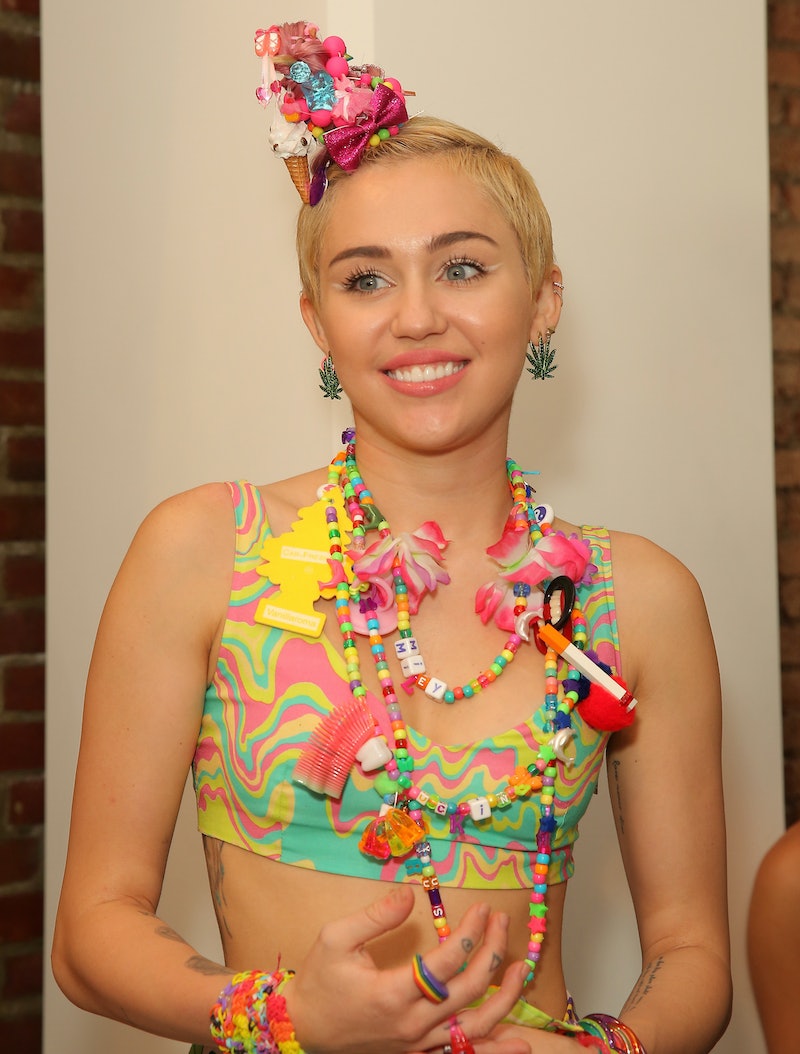 Nicki Minaj and Miley Cyrus are no strangers to controversy — but that's only one thing they have in common. They also both have a love of freely expressing their opinions, shaking their booties, and not having any hesitation when it comes to sharing anything and everything on social media. So you would think they would be able to find some common ground, but apparently not. Miley Cyrus appeared to throw shade at Nicki Minaj in a video she recently posted on her Instagram account. In the video, Cyrus is backstage at her concert, dancing around, and wearing a big prosthetic booty saying, "I don’t even need wigs, bitches." A reference to Minaj's style, perhaps? Not to mention the thong-adorned booty = #TotalNickiMove.

Is Cyrus emulating Minaj out of admiration or some sort of spite? There seems to be no real life reason for the two to have hate between them. Plus, they're both two successful women doing their thing — can't they do that separately and in peace? For two stars who emphasize female empowerment, you would think they wouldn't start such a public back-and-forth and apparent rivalry. Yet, their social media activity tells quite another story of a very public and competitive nature.

Where could the bad blood come from? Maybe Cyrus is miffed by Minaj's "Anaconda" music video breaking her “Wrecking Ball” record for the most music video views in 24 hours. Nevertheless, the shady behavior predates that milestone in Minaj's career.

Before Minaj broke her record, Cyrus used the "Anaconda" cover art to promote her VMA Video of the Year Nomination. And before that, when Minaj’s "Anaconda" cover artwork basically broke the Internet, Cyrus posted the parody pic for the first time, and even made it her Twitter photo, which did not please Nicki Minaj.

Then Cyrus went even further with the parody, referencing her Hannah Montana days with Hannahconda. Minaj's response? "No chill ZONE!!!!"

For Halloween in 2012, Cyrus dressed up as Minaj, which seemed like a compliment with Minaj retweeting the photo. Then Minaj changed her mind, Instagramming the photo with the caption "This cheap a*s Cyrus is killing me. Damn she ain’t need a costume anyways."

So how did Cyrus respond? She dressed as Lil Kim the next year, purple pasties and all. This could have been an homage to Lil Kim, but everyone knows that Nicki Minaj and Lil Kim have a long-standing feud, and this costume could have been a revenge tactic from Cyrus.

Is this shady behavior? Is it harmless fun? Is it just another way to get more press attention? Why are they even feuding? If you can call it that. With no plausible reason for the discord, there should be enough room for both women to get time in the spotlight in real life and in social media. Wouldn't it be nice to scroll through Instagram and see behind-the-scenes photos of the ladies collaborating in the studio or rehearsing for a music video? Just imagine how many records that single would break.