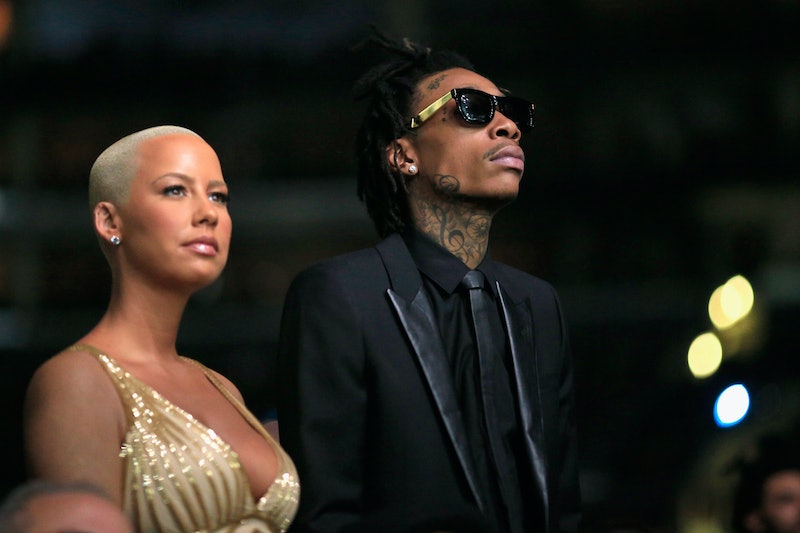 Well, this is awkward. After the news broke that Amber Rose and Wiz Khalifa were getting a divorce, people rushed to find an explanation a little bit more exciting than "irreconcilable differences". It didn't take long for a rumor to begin circulating that Rose had cheated on Wiz Khalifa with Nick Cannon, because her split with Wiz Khalifa came after Cannon became Rose's new manager. However, Rose denied the cheating rumors on her Twitter Thursday morning — or, rather, she denied the rumors of her cheating. As it turns out, the rumors of Wiz Khalifa cheating are the ones we should probably have been listening to.

The saddest part of this is that Rose and Wiz Khalifa's separation really seems to come out of nowhere. The last time the couple made the news, Rose was dancing to one of his songs in front of a painting of him almost a month ago. Their impending divorce took all of their fans by surprise, but E! Online reports that Rose and Wiz Khalifa been having trouble behind the scenes for a while. The couple has only been married for just over a year and have a 1 year old son named Sebastian together, but apparently Sebastian is Rose's only focus in this entire ordeal.

I understand that Rose is upset, but this is some major league shade that she is throwing Wiz Khalifa's way. Simply denying the cheating rumors about her would have been the more amicable way to go. Airing her and Wiz Khalifa's dirty laundry just seems a little bit wrong. If her her main focus is her son, then it would have been a kinder move not to confirm that his father is a philanderer on social media. Sebastian will learn how to use Google eventually. Then again, considering the stories and theories that have been put forward about Rose since the announcement of the divorce, she probably considers it better his name being dragged through the mud than hers.

When the crime that brings a relationship to an end is infidelity, I don't really expect anyone involved to be able to remain calm and rational. If Rose is telling the truth and her now ex-husband did cheat on her, then I don't blame her for feeling more "Before He Cheats" than "Irreplaceable" right now. However, the infidelity wasn't mentioned on the divorce documents obtained by the media and I don't think it should have been mentioned now if the two of them really did want to make this divorce go as smoothly as possible. Now it's just getting messy.

While it's good to know that Rose and Cannon weren't disrespecting their respective spouses by having an affair — even if they're both in the middle of divorce proceedings at the moment — it's not so good to know that Wiz Khalifa is now going to be the subject of cheating rumors. It would have gotten out eventually, as these things always do, but for Rose to be the one to announce it to the world wasn't the best move. Thankfully, Sebastian is only 1 year old, so it will be quite some time until he's able to read a newspaper with that kind of headline in it.

In the meantime, I can only hope that from here on forward, Rose and Wiz Khalifa get through the rest of their divorce proceedings without further incident or shade-throwing. They have a child to think about, after all. Dragging each other through the mud might feel satisfying for now, but it only hurts the child in the end.