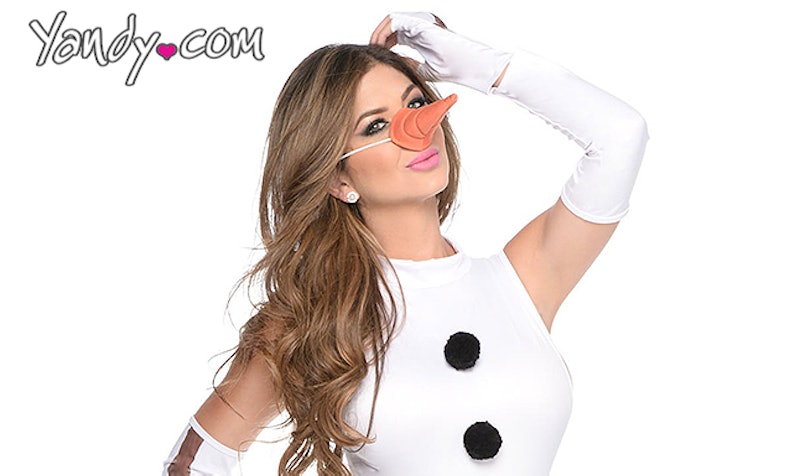 I don't know about you, but the second I saw Frozen, my first though was "Whoa, sign me up to be a sexy version of that snowman character this autumn." That's just the natural order of things. So when Frozen 's sexy Halloween costumes finally went on sale, it felt like destiny was finally unfolding. Sexy Olaf, Sexy Elsa, Sexy Anna, they are all accounted for. All we're missing is a Sexy Kristoff and a Sexy Hans, which I'm real bitter about.

The debate over whether or not one should rock a supah-sexy Halloween costume is dated at this point — just do you, you know? But that doesn't stop the tradition from retaining its hilarity when viewed as a product of our weird-ass culture. You know what my favorite part of the Sexy Olaf costume is? That the manufacturers clearly gave no shits about actually making anything even remotely resembling a snowman. We've got the (felt? foam?) carrot nose and the pretend stick-arms, but not much else is going on there that indicates any kind of effort. Bless Yandy, they took such a different route than the one we here at Bustle set up.

Actually, I take that back — the best part of this is that they can't use any of the actual names from Frozen for fear of being sued to high heaven by Disney. And so it is that Sexy Olaf is now "Funny Snowman costume" (alternately "Sultry Snow Darling," oh god), Anna is "Norwegian Maiden," and Elsa is "Ice Girl." Not even "Ice Queen." Gotta love it.