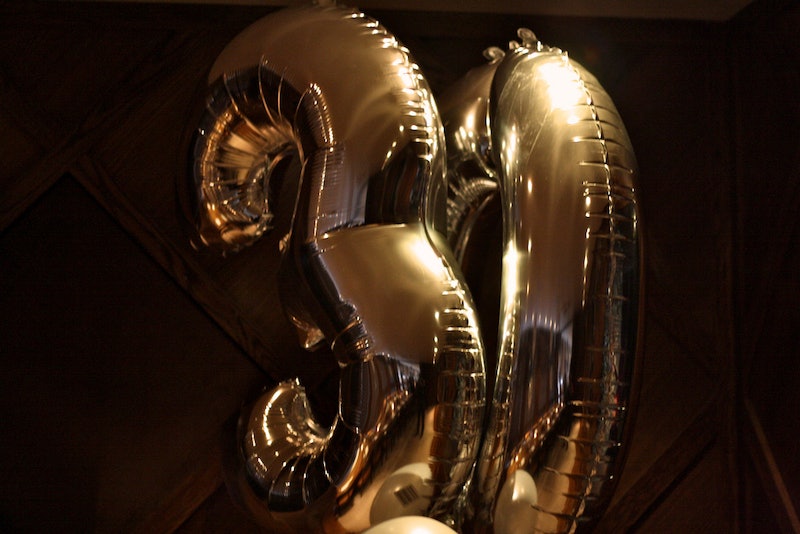 When I was in my late twenties, every older woman I met told me how amazing my thirties were going to be. It didn't matter whether they were a friend's slightly older friend, or a 40-something boss at my job; once we got to talking, and I mentioned my trepidation about turning thirty, every one of them told me their thirties was the greatest decade of their lives. "Your twenties are just practice," a friend's mom told me. "Your thirties are where it gets good."

These women were all successful, cool, and smart — way more successful, cool, and smart than I was, certainly — but I was still incredulous. My teens, which were supposedly the Best Years of Your Life, straight-up sucked; and my twenties, which plenty of people had promised me would be The Best Years of Your Life (Part II) had been a mixed bag. Sure, I had friends, and I had fun; but I also spent a lot of time feeling lost, and in over my head (I was also way too into drunk-texting my exes). And since your twenties seemed to be everyone else's idea of a good time, I wasn't too excited to see what goodies my thirties might hold.

But, at the risk of sounding like a monologue from a Lifetime original movie (hopefully I'd be played by Jennifer Love Hewitt), everything those women told me was completely true. My thirties have been awesome — in fact, the thirties of everyone I know have been awesome, especially people who, like me, had a slightly rough go of it in their twenties. So strap in, and let's sift through all the reason your thirties are going to freakin' rule.

You Suddenly Have All This Dignity

It totally comes out of nowhere! Well, okay, it actually comes from the three decades of life experience you've completed, but it really sneaks up on you. If you've suffered from "imposter syndrome" at work, that starts to slip away. When a friend or family member tries to pull a power trip on you, you speak up when you would previously just bite your tongue and feel like a loser. You don't let anyone shame you about anything, from your sex life to having a second piece of cake at a birthday party. Basically, you finally realize that you rule.

You Don't Have Time for Bullshit Any More

And with all that dignity comes a sharp decline in the amount of time you have for anyone's nonsense. Dudes trying to play weird mind games? Mean "friends"? Bosses who think they can extract a great job performance from you by keeping you in a constant state of terror? No, no, and naw. Dude, I can barely even fit in the things I like, what with these 457 weddings I have to attend in the next calendar year. So why on earth would I make time for this crap?

You Have Actually Learned From Experience

You know what wine you like, instead of just randomly pointing at the menu in panic and drinking whatever they bring you. You know how to do your job well. You know you're doing your job well. You know how to negotiate a lease, or invest money, or cook a dry-aged steak, or treat a colicky baby, or sew a shockingly accurate Katniss costume. You realize you've learned a ton about the world, in spite of yourself, just by living. And knowing so much makes it easier to learn new things, and feel relaxed and confident while you learn them.

Remember that time in your twenties when you went out with a bunch of friends who made way more money than you? And you got kind of steam-rolled into getting wildly expensive bottle service, or buying some clothes that were way out of your price range, or spending way too much money on some other thing that made you burst into tears every time you thought about it for the next year and a half? As you hit your thirties, the things that are really important to you snap more clearly into focus. And so, you become much less likely to do something you will regret long-term, just because in the moment it seems kinda embarrassing to tap out.

You Figured Out What Kind of Clothes Look Good on You

You no longer get dragged helplessly into fashion trends totally not for you and thus caused you to feel terrible about yourself (what up, crop tops). You might even get into (gasp!) classic pieces. But even if you're into neon spandex tube tops, at least they're the neon spandex tube tops that you know look good on you.

You Finally Figured Out What You Like in Bed

You are also finally figuring how to ask for it, without feeling embarrassed, every single time.

You Accept That You Are Not "Cool"

There is a great day that hits, sometime in your early thirties, when you realize that the carefully curated "cool" personality you developed in your twenties was a sham. I mean, I'm not saying you don't genuinely like single malt scotch and cool vinyl records and the films of Terrence Malick; I'm just saying you also like Celebrity Big Brother and any kind of snack chip that has the words "flamin' hot" on the packaging. And the day you realize you can own all aspects of who you are, all at once, all the time, is awesome.

You Will Never Drunk-Dial an Ex Again

Okay, fine, maybe you'll do it again. But it won't be some weird, sad, habitual thing you do every time you get a few beers in you, where you want to cry and talk about What Went Wrong; it'll just be because you've got some beers in you and you want to have sex with someone whose junk you've already figured out.

Doesn't matter if you got it from an antique dealer or found it on a street corner; all that matters is that it is made from actual wood or metal, instead of something that could, at best, be described as "wood-like."

I mean, I'm not here to straight-up lie to you; life is still totally terrifying, and your thirties will probably be full of all sorts of new, exciting developments, like work promotions and marriage and kids, that will scare the living shit out of you. But you'll never again feel the sheer terror you felt in those years right after graduation, when you secretly suspected you might be the only person in the history of the world who was not going to figure life out at all.

The Facebook Baby Pictures Situation is Not Actually That Bad

I mean, it's not as bad as everyone says it is. I mean, there's still at least a few pictures on your feed of other stuff! Mostly brunch and triathalons, but still.