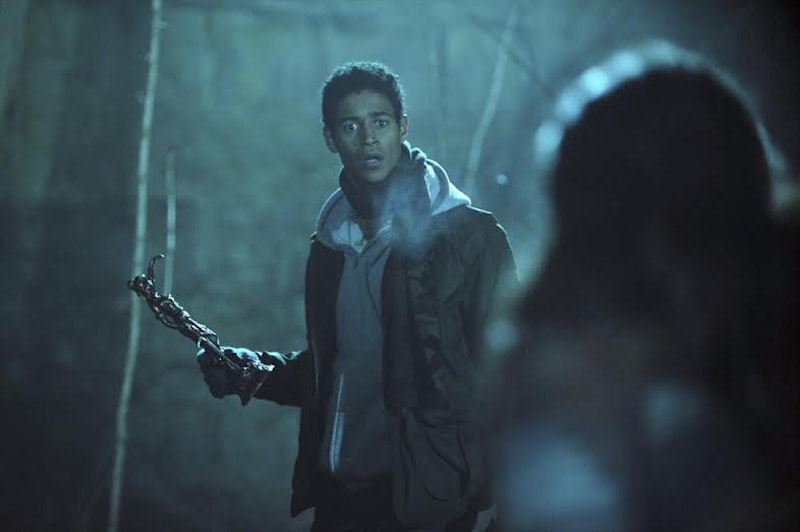 As we already know, Shondaland can do no wrong with primetime television. That is definitely the case for Shonda Rhimes' new crime drama How To Get Away With Murder, when the first minutes of the premiere episode show the main characters debating what to do with a dead body in a creepy forest. Talk about jumping right into the plot, right? Did the HTGAWM students kill someone already? Here's what we know about the dead body and the law students so far.

First, we don't know right off the bat that these students are law students studying under Viola Davis' character Annalise Keating, but from the commercials, we can figure it out. So why are they in the woods together? And why are they discussing what to do with a dead body? Well we don't get to learn that right away, because that would be too easy wouldn't it? Instead, we flashback to three months earlier, when Alfred Enoch's character, Wes Gibbins, rides up — on his bike — to his first day of law school.

Throughout the episode, we learn more about the situation the students are in with the dead body. They don't know what to do with it — obviously — so to break a tie among the group, they flip a coin. Next thing we know, they are in Keatings' office rolling up the body in a rug, cleaning up blood, and bleaching the murder weapon — which happens to be the "immunity idol" Keating teased her students with when introducing them to the case she is currently working on.

Then, in a complete plot twist, we find out in the very final seconds of the episode who the body is, and it definitely isn't who you thought. Throughout the episode we learned of a missing student, Lila Stangard, who was found dead after going missing a few days earlier. For some reason, Keating's husband, Sam, seems a little too upset about her death, which could be the reason he is the dead body in the forest three months later. Was he up to something that Keating didn't like, and did he die because of it? Is that why these students are covering up the murder, to prove their worth to their professor? Throughout the season we will most likely learn about how these students got into this situation, but as of now, it seems like they are all willing to go to any length to get ahead in their careers — maybe that includes murder.