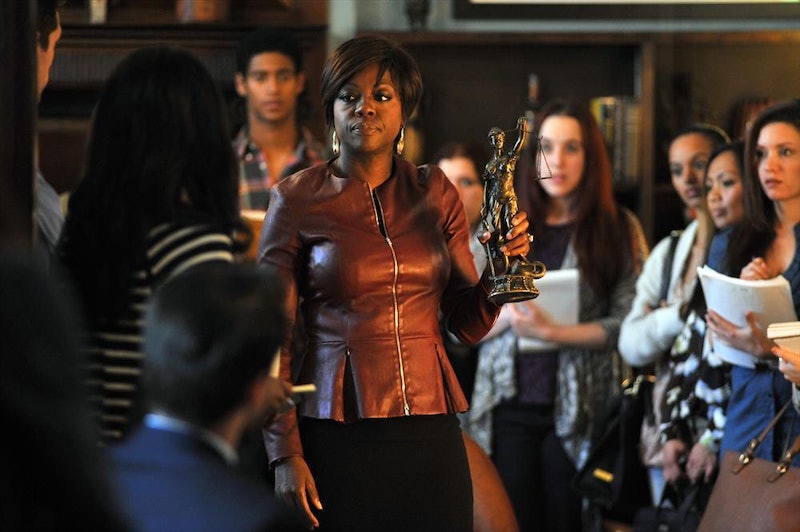 Thank God it's Thursday — or at least that's what Shonda Rhimes & co want our new motto to be now that Rhimes is at the helm of her own primetime night on ABC, featuring a three hour block containing Grey's Anatomy, Scandal, and the brand new How to Get Away With Murder. I'm the last person to doubt Rhimes, really, considering the fact that everything she touches turns to gold. Despite certain major news outlets want to claim, Rhimes is known for pioneering shows that star strong, compelling female characters, like Meredith Grey, Olivia Pope, and now, How to Get Away With Murder's Professor Annalise Keating (Viola Davis), and before the series has even premiered, Davis' Professor is already looking like one of the most badass characters ever. The big question is: Is Annaliese Keating based on a real person?

As much as I want to believe that all Shondaland character have their roots in actual, living people, as is the case with Meredith and Olivia, there's no evidence that Annalise's story is based on a true one (you know aside from being inspired by the presence of real life, kickass professors all over the U.S.).

And perhaps there's a reason we won't be finding the real Annalise Keating (like we have with the real Olivia Pope) any time soon. We all need to remember that although HTGAWM is a Shondaland production, it's not Shonda-created, like Grey's and Scandal are. There's another force leading this charge under Rhimes' guiding hand. And, understandably, Rhimes doesn't want us to forget that. This time around, she's merely the executive producer:

The man (yeah, man) we should be thanking when Annalise becomes our new favorite character (and, incidentally, HTGAWM our new favorite show) is Peter Nowalk — and don't worry, this is a guy I already like. He's written episodes for Scandal and Grey's Anatomy, and where Grey's is concerned, he's produced and acted as a story editor as well. This guy has the Shondaland rhythm down, and I can't wait to see where he takes it.

And although Professor Keating isn't a real person (that we know of — maybe Nowalk will reveal her origins years from now), she sounds pretty awesome anyway. Not only is she a criminal law professor, but she's also a criminal defense attorney... which means that when someone does something like, oh, I don't know, kill someone else, she has to try to prove that they're not guilty, even if they are. Not just anyone is capable of holding that kind of job, which means Keating is going to be a seriously awesome character... if not maybe a little crazy.

If you don't learn anything else from Professor Annalise, though, remember this: As far as we know, she is not based on a real person, especially not Shonda Rhimes (sorry, NY Times). "It doesn't feel autobiographical," Rhimes told USA Today. "A, because I didn't write it and it's not about me. She's not like me at all. I don't know whether to be insulted."

Should she be insulted? I'm so ready to find out.