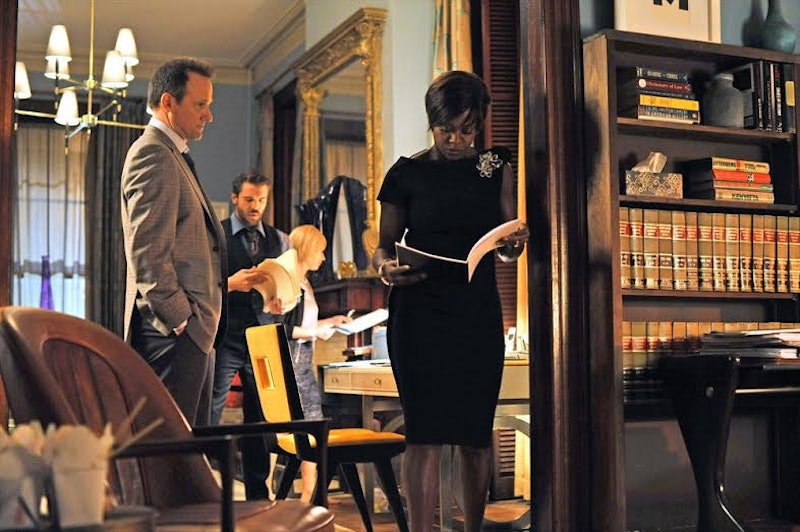 She's intense. She's fierce. She is a total badass. She's also the incredible attorney on How To Get Away With Murder , played by Viola Davis, Annalise Keating. In the premiere episode of the series, we learn right away that Viola Davis' Keating is clearly a woman who will do whatever it takes to win, or as she says — do her job. And sometimes "whatever it takes" might not be the most ethical, even if it means having an affair with the lead detective on a case she's currently working.

Alfred Enoch's character Wes Gibbins learns this early on when he walks in on Keating with a man. Sure, it's awkward... he should have knocked first, but it doesn't seem like anything that would totally ruin his chance at being one of the five students invited to work for her, right? Well, that's what I thought until Wes met Keating's husband... which was not the man he accidentally walked in on.

And that isn't the only twist of Keating's romantic entanglements. Here's what we know about Annalise Keating's husband, boyfriend, and potential new fling.

We meet Sam Keating, Annalise Keating's husband, at party, but to our surprise he is not the man that Wes had walked in on earlier in the episode. Plot twist. He is a psychology professor, and seems like a pretty normal guy. At the end of the episode though, when Lila Stangard's body is found, Sam seems a little too upset about the discovery, and we start to get a feeling that maybe there was something going on between them. Could he be involved in Lila Stangard's death? It certainly seems like Annalise thinks he was up to something with her, as she looks off to the side after saying it was probably the boyfriend (was he the boyfriend?) and we find out Sam is the dead body in the woods with the students, about to be lit on fire.

Detective Nate Leahy is the man that we see getting it on with Annalise when Wes walks in to suggest a theory about the case. Awkward. It isn't until later in the episode though that we learn he not only isn't Annalise's husband, but he is the lead detective on the case that Annalise's team in working on currently in court. He is called upon to take the stand, and Annalise completely rips into him, and gets him to admit that the video evidence used against her client could possibly be altered surveillance, which leads to her client's freedom. Annalise refers to Det. Nate as her boyfriend to Wes.

Wes is a first year law student of Annalise Keating. After he learns about Keating's affair with Detective Nate, Annalise confronts Wes with an emotional plea to keep the secret between them. In a weird twist, Annalise starts to slightly caress Wes before he leaves the room. She then gives Wes the last spot as a student working for her team, which he thinks could be because he knows of her affair with the detective. Could their relationship develop into anything more than student teacher? Possibly. It seems like Annalise is a woman who goes after what she wants.