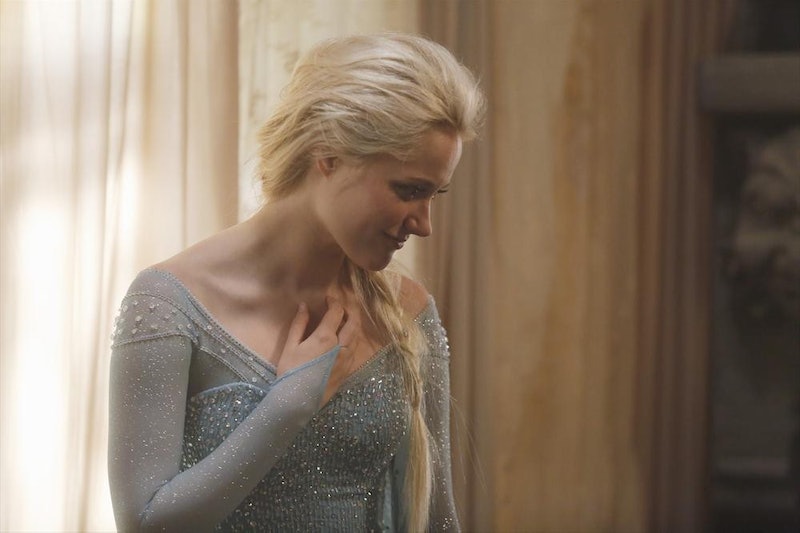 When Sunday’s most enchanting drama returns, Frozen’s Elsa will appear a likely villain, misunderstood by her surroundings yet again, but if anyone can stop Storybrooke from getting completely frozen over during Once Upon a Time’ s Frozen arc, it’s Emma “The Savior” Swan. Just because the trailer shows a certain Ice Queen painting the town blue, it doesn’t necessarily mean bad news for Storybrooke. More likely, the uncontrollable ice is a result of Elsa’s finding herself in a strange land, scared and alone, as she has been so many times before. But she isn’t the only woman in Storybrooke with a history of fear and isolation. Rather than writing the Queen of Arendelle off as the villain, if you think about it, a budding friendship between Elsa and Emma actually makes complete sense.

Co-creators Adam Horowitz and Eddy Kitsis revealed to The Hollywood Reporter that Elsa would become very important to Emma because of their many similarities. Having the world of Frozen come into Storybrooke, star Jennifer Morrison told The Hollywood Reporter, has "given us opportunities to explore different parts of our characters and stories we never would have had without them." Frozen fans already know a lot about Elsa’s past — the family drama, the isolation, the lack of control. In Emma’s case, her relationship with Elsa might open up a storyline we haven’t been able to see much of: Emma’s childhood. Even though Elsa’s arrival is likely to cause mayhem in Storybrooke at first, a heart-to-heart between the two blondes could lead to an eventual relationship that seems pretty rational, if you ask me.

It’s safe to say Emma and Elsa both preach the “don’t let them in, don’t let them see” method of living. Elsa, for the obvious reason of potentially freezing their hearts, but Emma because there was no one to set an example for her. Throughout her adolescence, Emma couldn’t understand how anyone could give her up and struggles to trust people because of it. Neal leaving her pregnant and in jail probably didn’t help much either. Without a sense of stability, how could either of them truly figure out who they are? Even when Elsa thought she was free to be herself, her kingdom wrote her off as a monster. And even with Emma’s parents back, they are the same age as her, with equal amounts of experience, and therefore minimal guidance as far as parenting goes. They both need a friend in the world, especially now — someone who truly understands what the other has gone through.

THEY BOTH FELT ALIENATED FOR MOST OF THEIR LIVES.

Even before her parents’ death, Elsa was forced to exist only behind closed doors, hidden from everyone — including her sister. She never knew what real friends or real relationships looked like until Arendelle finally accepted her for who she was. Emma lived a similar life, in and out of the foster care system with no family to speak of and no one to trust. She was abandoned as a baby and knew it, and could never find a way to let it go (pun intended). Even now, Emma hasn’t been able to accept that she was alone for 28 years of her life without love and without hope.

THEY BOTH HAVE POWERS THEY CAN’T CONTROL.

As much as the Charmings don’t want to admit it, Emma’s magic is at its most powerful when she channels her anger. “Conceal, don’t feel” will work for her just about as much as it did for Elsa — which is, like, not at all. Her hostility as a child and young adult resulted in a dark side that she needs to learn how to control now. When Elsa isolated herself on the mountain, she was able to experiment with her abilities and eventually learned that her lighter emotions are equally powerful. A mentor like Elsa could be exactly what Emma needs during a time when her usual mentor, Regina, could be turning against her.

The Sept. 28 premiere will feature Elsa's chilly debut, an icy encounter with the dwarves, and a not so friendly snowman. But how long will it last? Without Anna to protect her, Elsa might need Emma even sooner than Emma needs her.