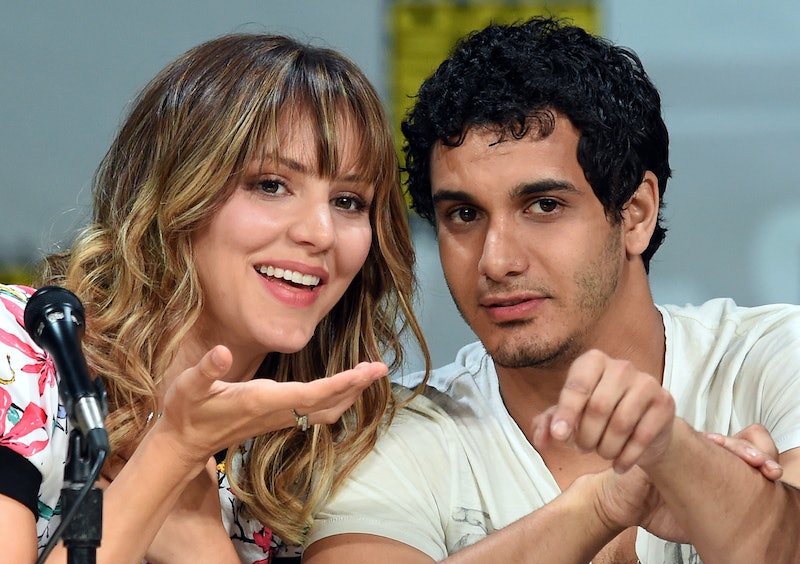 If you, like me, watched the first episode of Scorpion when the show debuted on Monday and are already hardcore shipping insensitive genius Walter O'Brien with empathetic waitress Paige Dineen, then get ready for some good news having almost nothing to do with that. According to US Weekly, Katharine McPhee and Elyes Gabel are allegedly dating in real life ahead of their characters on the show. While the rumors have been plying of McPhee and Gabel cozying up to each other, rumors that could have been easily dismissed by the fact that, hello, they work together, US Weekly's insiders claim this off-screen relationship is very much on.

The report states that the two have been getting steadily closer ever since they began filming Scorpion. McPhee was photographed kissing Gabel's cheek and playfully groping him between takes of the show and an US Weekly insider states that they "were inseparable and got cozy all night" at a private premiere of the show in early September. Quite honestly, McPhee and Gabel wouldn't be the first and will be far from the last set of co-stars whose on screen chemistry sparked a lasting off-screen relationship. Emma Stone and Andrew Garfield anyone? And what about Angelina Jolie and Brad Pitt?

I'm not saying that McPhee and Gabel are at the Brangelina stage just yet, but I am saying that their on-screen chemistry is probably at least partially to blame for an cozying that may or may not be happening in real life. In the pilot episode of Scorpion, every longing, intrigued, or doe-eyed look that Walter and Paige shot each other from across the diner, car, apartment, or airport parking lot was practically cackling with chemistry. I don't know if Scorpion actually plans to introduce a romantic element to their relationship — although it's heavily implied what with the automatic in Walter has with her son — but it would be a shame if all of that chemistry just went to waste.

So while we wait for Paige and Walter to work their way up to an epic romantic adventure while solving crimes for the government, McPhee and Gabel will be giving us our chemistry fix behind-the-scenes. Besides, McPhee more than deserves to have some good news and good press happen in her life after the awkward, messy, public breakdown of her previous relationship that still follows her to this day.