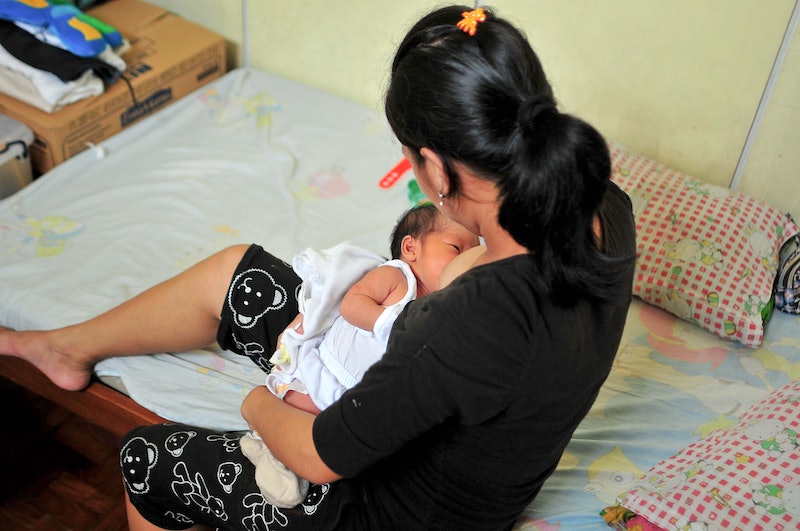 When China’s Zhejiang province decided to construct breastfeeding curtains on public buses to shield breastfeeding mothers, they had the interests of women in mind. A bus driver in the province named Cheng Yanhong noticed that mothers riding her bus had difficulties soothing their babies, and were perhaps self-conscious about breastfeeding their children on board. After a trial run on a Jinhua city bus beginning September 19, Chinese mothers seemed to agree. 30 year old mother Gao Xin told China Daily :

I think it is very necessary, as mothers like me are often embarrassed to breast-feed their child though the child is very hungry. The curtain can solve the problem.

She added, however, that a single curtain might be insufficient. In an interview with China Economic Net, another Chinese mother expressed a similar sentiment:

Before, when I rode the public bus, I would always very awkwardly find a nook in the furthest-back row of seats to feed my baby. But now, with this special seat, I don’t have to be so embarrassed.

The curtain, then, portends to be a positive addition to the Chinese public transportation system by offering women some much-desired privacy. The physical construction itself costs a mere 300 yuan, or 50 U.S. dollars, and is located in the front of the bus. It can be converted into a regular seat if there are no breastfeeding mothers on board, but these women of course have priority access. As the Jinhua City Bus Group considers expanding its program and installing curtains in more public buses, however, it's important to consider the kind of message these curtains convey.

In a climate where public breastfeeding is often met with dirty looks and occasionally being asked to leave a restaurant or store, what does it mean that women are encouraged to hide behind a curtain in order to feed their children? U.S. lactation consultant Leigh Anne O’Connor tells Quartz that discouraging women from breastfeeding in public is highly problematic.

If we bring [breastfeeding] back, normalize it, we don’t have to hide behind curtains. It’s a normal part of life.

There is the sense, then, that asking women to "cover up" is disempowering. It suggests that we're not free to do what we want with our bodies, or that we should somehow be ashamed of showing a little too much skin while nursing an infant in public. Vain Mommy blogger Raivon Lee posits to CNN that asking women not to publicly breastfeed is an extreme double standard:

"Many times you will see more 'cleavage' in the name of fashion than you ever would from a mom feeding her child. [...] Women buy into that idea [of being seen as sexual objects]. If we use our breasts for anything other than 'play' it's not okay."

When the media celebrates breasts as objects of sexual appeal, why then can we not celebrate breasts as life-giving sources of nourishment? Perhaps we're squeamish about seeing women breastfeed because it's simply not done often enough. Establishing mechanisms such as curtains on public city buses, then, seems to present a sure-fire way of hindering the normalization of public breastfeeding. The more we attempt to keep this very natural and beautiful process under wraps, the less acceptable it will be in the future.

Let us not forget, however, that some mothers prefer to breastfeed in private, and that Chinese mothers responded positively to the curtain on the Jinhua city bus. So long as it is not mandatory to use these curtains, then, it appears that they are a welcome option for women who respond more conservatively to showing their bodies in public. What is more, China is an area where breastfeeding rates have declined over the years, and the government is currently taking measures to encourage women to resort back to the practice. Although choosing how to feed your child is a personal decision, the fact remains that "breastfed children have at least six times greater chance of survival in the early months than non-breastfed children," according to UNICEF.

In light of this information, it would appear that any way of boosting the health of Chinese infants, curtain or no curtain, is a positive measure. Still, it is important that women have free reign to breastfeed however they like, and we should discourage any scenario in which breastfeeding mothers are shamed by onlookers. At the end of the day, having control over our bodies is a basic human right, and whether we choose to breastfeed in the privacy of our own home or in the back of an Anthropologie, the choice is all our own.

More like this
25 Quotes About Love To Share During Pride Month 2022
By Madeleine Aggeler and Emma Garza
How To See The Lunar Eclipse On May 15-16, 2022
By Kaitlyn Wylde
What The History Of Pride Month Means For Celebrations Today
By Jay Polish
Is TikTok’s “Villain Era” Trend Just An Excuse For Bad Behaviour?
By Chanté Joseph
Get Even More From Bustle — Sign Up For The Newsletter