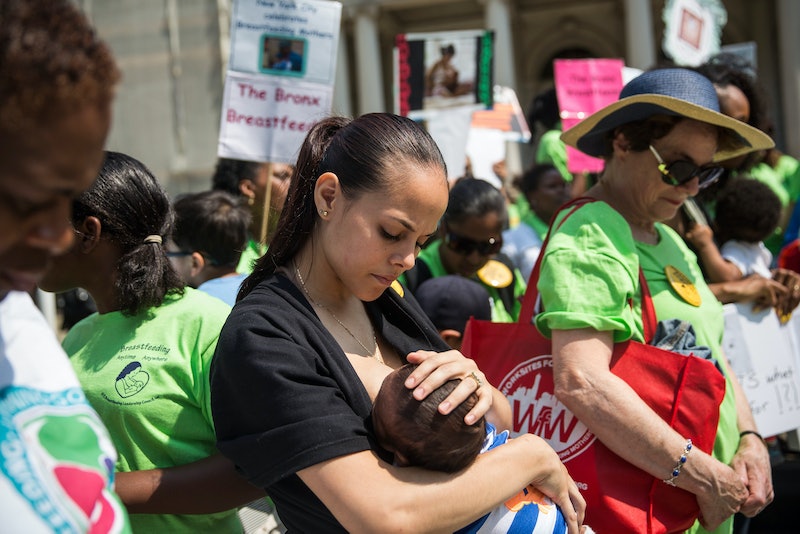 I am still breastfeeding my daughter after two-and-half years, and I am a staunch advocate for breastfeeding. Although I knew breastfeeding would be challenging, I never expected the backlash I would receive from strangers — as well as from my friends and family. Every time I nursed, I felt that I became a billboard for breastfeeding.

And I was proud to be one. After all, this is a right that still needs to be fought for: In Virginia and South Dakota, breastfeeding moms may be exempt from nudity and public indecency laws, but there is still nothing on the books that protects as women’s right to breastfeed in public. And in Idaho, public breastfeeding has no legal protections.

But before you think it's all milk-heaven and baby-sweet-scents, there are some downright hard truths about breastfeeding. Most of them have to do with the realities of nursing itself, which can be exhausting. Other difficulties have to do with other people's opinions, which never seem to quiet.

You are at the baby's beck-and-call at all times

Sure, that's true for motherhood in general, but if you are committed for the long-haul, the most successful way to continue breastfeeding longterm is to breastfeed on demand. Sure, you can pump, but pumping is both time-consuming and a serious drag. Breastfeeding is quick, it requires no equipment or sanitizing (other than keeping yourself and the baby clean), and it's there when you need it.

The baby’s needs may be aggressively overwhelming sometimes, especially during growth spurts. You will feel exhausted and over-touched. You may feel like you are waking up every few hours. You probably are.

it doesn't come naturally to everyone

Many women give up breastfeeding early because they think they can't produce enough milk. In fact, being able to produce enough milk can actually take lots of time and adjustments. The struggle is anything but easy, especially when many new mothers may feel like failures for being unable to do what women have been taught is supposed to come naturally.

You have to adjust your wardrobe

Want to wear that cute new boutique dress with its cinched waist? That would be a negative. Both you and the baby will want a quick and easy wardrobe that requires little fuss — and doesn't cause a scene when your hungry nursling has to wait for you to unbutton or unwind. And say goodbye to cute bras for awhile.

If you hit a year of breastfeeding, then two, you will categorized as a hippy-freak. That’s okay.

Surround yourself with like-minded people and don’t pay attention to people who ask, “How long do you plan on doing that?” Or you can choose to be snarky and tell them, “Until she leaves for college.” Once, I was eating at a restaurant and a young couple loudly began talking about how "disgusting" it was that I was openly breastfeeding. "Do you see that?!" the girl fake-whispered. "I can't believe she is doing that." I learned to expect and ignore such comments, even when they were from my own family.

You become a de-facto breastfeeding advocate

I remember the first time I ever breastfed in public at a restaurant using a nursing cover. I felt like everyone was starting at me, and even heard a few sighs of exasperation. But once I took the baby to the doctor, and realized how happy and healthy she was, my resolve to keep breastfeeding was secure.

From then on, I stopped using nursing covers. There is no bright yellow graphic blanket to shout out what I'm doing. And if someone does see, I just meet them in the eyes and smile. We’re happy, so move on, stare monster.

If you go back to work, it takes superhuman strength to continue breastfeeding

Pumping often yields a pitiful amount of breast milk, and most women think their supply is dwindling and end up giving up at the three-month mark. When I returned to work a year after my daughter was born, I was depressed by how few ounces I was able to pump. I pumped what I could, and made up for it by nursing her at night, as suggested to me by lactation consultants. I worked. She got what she needed, and I didn't stress about it.

It changes your attitude about your breasts

Breastfeeding can be extremely painful, and infections like mastitis and extremely sore nipples are commonplace. When I first started breastfeeding, I had too much milk, and suffered from a painful infection which required hand extraction by the doctor. (It was as terrifying as it sounds.) The pain was almost as bad as labor itself.

Still, through it all, I learned to respect my breasts in a way that I hadn't before. They've been through a lot, and they help sustain life. They are far more than an object for male pleasure.

More like this
25 Inspiring Quotes From Black Women To Celebrate Black History Month
By Kyli Rodriguez-Cayro and JR Thorpe
24 History-Making Black Women You Probably Didn't Learn About In School
By Ayana Lage and JR Thorpe
You're Aging Your Body Too Quickly If You're Not Doing Any Of These Things
By Bimini Wright
15 Black-Owned Liquor & Wine Brands To Add To Your Bar Cart
By Alexis Morillo
Get Even More From Bustle — Sign Up For The Newsletter
From hair trends to relationship advice, our daily newsletter has everything you need to sound like a person who’s on TikTok, even if you aren’t.