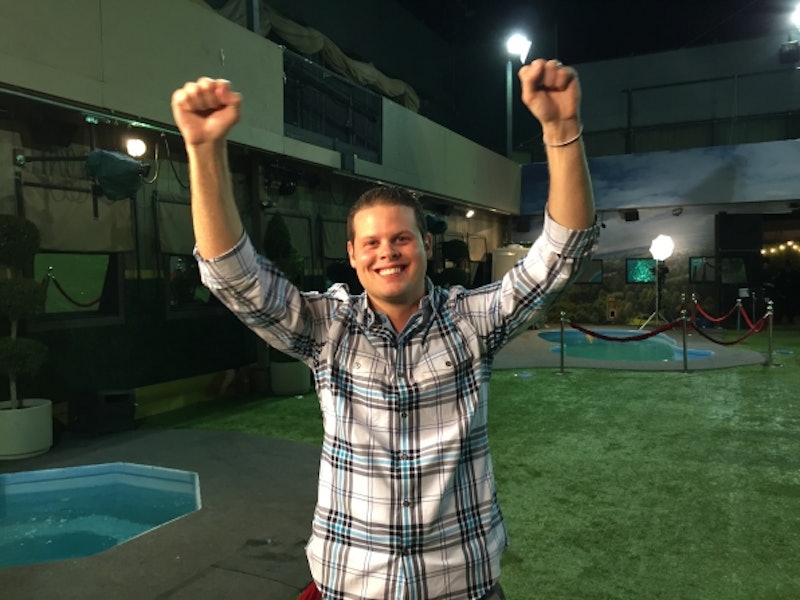 Frankie Grande may say that he knew Big Brother winner Derrick was a cop, but he definitely didn't know to what extent Derrick was deceiving his fellow houseguests. On Wednesday's finale Julie Chen let Derrick come clean about his real life job as an undercover cop, which completely shocked even his closest allies in the house. But did Derrick ever think about telling the houseguests? "When we talked about police officers or it just came up in general conversation, it usually wasn't positive. So I realized there was really nothing good to come out of me telling them," Derrick tells me.

"I literally became that person when I entered the house," Derrick says, referring to his parks and recreation coordinator persona that he used with the other houseguests. "That's who I was, those 10 years of my life in law enforcement, and the fact that I had a master's degree, it was dead to me, it didn't exist." He even came up with a backstory to the new Derrick; Big Brother Derrick had an associate's degree, was a supervisor, was kind of a juvenile delinquent that had made some wrong choices, and was in the Big Brother house to right a wrong.

But Derrick did have a little experience in the parks and recreation department of a municipality, which he says helped him. "I definitely researched it going in, but in addition to that, from the ages of 16 to 18, I was actually a park supervisor, and there was a parks and rec coordinator above me, so I had the advantage knowing somewhat of the system." But knowing the details of the job wasn't necessarily the most important part of Derrick's ruse. "The biggest thing is not saying it, it's retaining what you said and remembering exactly how you said it."

Derrick was so convincing as his undercover persona, that he was able to come up with stories and details off the cuff, that convinced those that thought they knew him the best. "I have been living with Derrick for 95 days, I consider him family," Victoria — the final juror and third place houseguest — tells me. "I go into the finale and I have no idea who the real Derrick is. I think you guys know more about him than I do."

So are there any hard feelings? "Not even close," Cody, this season's runner up, says. "I think that is the funniest part of Big Brother, that someone can come in with such an unbelievably elaborate story that you would never peg them to be lying."

"The guy is good," Cody gushes. "I mean he is undercover, that's what he does. It just compliments his game so much more," he says, which really brings up a good point. Derrick's game was really admirable, after all, he managed to never be nominated through 55 nominations. But Derrick was also able to use his personal experience as an undercover cop to profile the houseguests and control the game, which ultimately led him to the much deserved prize money and title of Big Brother winner.