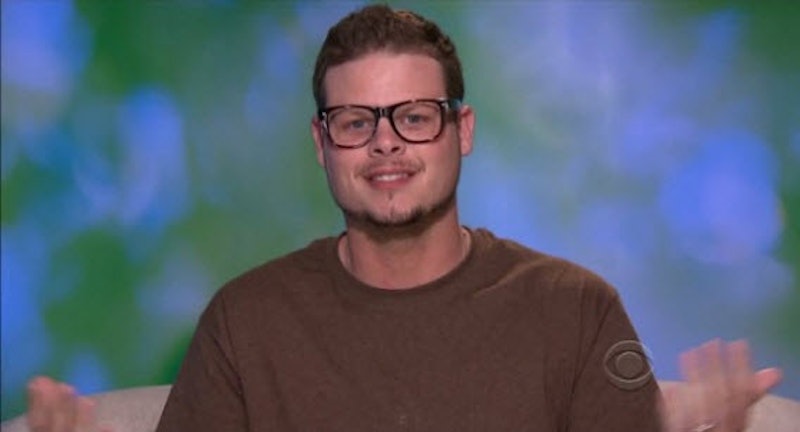 Finally, the big twist reveal we were all waiting for! No, not Team America (but nice try, Julie Chen). During Wednesday night's live finale, Big Brother winner Derrick revealed that he's a cop to the jury members and his final two partner, Cody, and everyone was shocked. Well, everyone except Frankie, who claims he knew it all along. OK, Frankie. It seemed likely that Derrick would reveal his big secret in his speech to the jury, but he kept it on the DL even then, waiting until Julie prompted him to take the floor.

Then he stood up, told everyone that he's not a parks and recreation coordinator, but an undercover police officer. Frankie freaked out and pointed to Caleb, exclaiming that he "knew it." Once again, OK, Frankie. Someone who was surprised, but not at all upset? Derrick's fellow Hitman and ride or die, Cody. He just let out a huge grin and gave some sort of exclamation that I'll transcribe as "gah!" To prove that this was part of Derrick's plan along, Julie showed Derrick's Big Brother audition video in which he explained, in a much heavier Rhode Island accent, that though he'd consider telling the other houseguests that he's a cop, he would never reveal that he works undercover. Why? It makes him basically the perfect Big Brother contestant and would have immediately put a huge, glowing target on his back.

It seems he made the right decision, as Derrick went on to win Big Brother, and no one was even angered by his reaction, just surprised and of course, impressed.