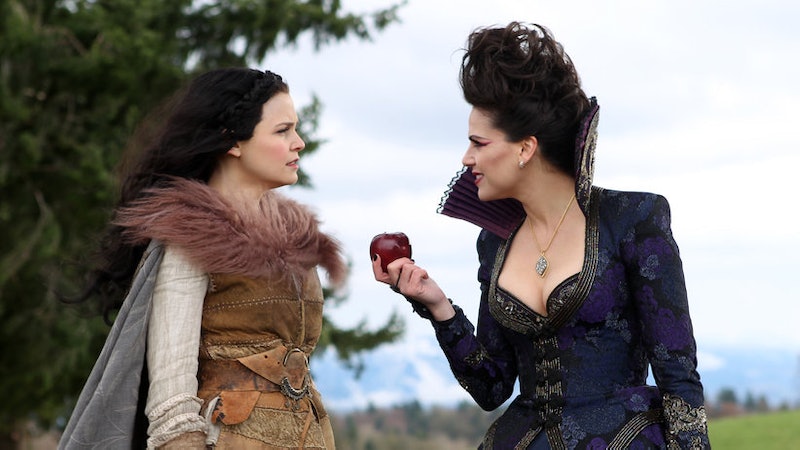 The creators and actors of Once Upon a Time have been driving me absolutely crazy with their hints and revelation about what Season 4 has in store for all of our favorite characters. Although my top priority is, as always, everything Frozen, there was a cruel piece of not-Frozen related news that managed to catch my eye. The second half of Season 3 was amazing when it came to repairing the relationship between Snow White and Regina Mills, because the two finally realized what most of us have known all along: they have got a lot in common. If I'm reading these latest hints correctly, they're about to have another thing in common. Ginnifer Goodwin revealed Snow White will be getting a new job in OUAT Season 4 and I think I've guessed what it is.

According to The Hollywood Reporter, Goodwin said, "She has been thrust [into] a brand-new job while she's trying to juggle [raising a newborn] and she's expected to rule as she is technically the ruler of the Enchanted Forest transported to Storybrooke." Then Jennifer Morrison, who plays her on-screen daughter Emma Swan, apparently hinted that "Mary Margaret will be taking over a position of considerable power for someone else within Storybrooke". Hmm. Expected to rule? Position of considerable power? Am I the only one who guessed that Snow White will become the new Mayor of Storybrooke?

Back when the original curse was still a thing, the Evil Queen became Regina Mills, Mayor of Storybrooke who had been Mayor for as long as anyone could remember with no one ever bothering to run against her. After the curse was broken by Emma's love for Henry, an angry mob showed up at Regina's house and no one much bothered to treat her like a Mayor after that. Since then, Regina hasn't had the time — or the interest — in doing any kind of job since, let alone being Mayor of a population of people who hate her. Everyone began looking to Snow White and Prince Charming for guidance anyway, making this a moot point.

Essentially, the position of Mayor of Storybrooke is an occupation that has been empty since the curse broke in the Season 1 finale and no one noticed. Snow White, who had been cursed as Mary Margaret Blanchard and an elementary school teacher, is actually the queen of this kingdom. If she's getting the Storybrooke equivalent of that job, then Mayor is the only occupation that I can think of. Prince Charming and Emma Swan make up the Storybrooke Sheriff's Department, but no one has considered going for Mayor. It would be an ironic twice considering the Evil Queen once told Snow that she "may have been a princess, but you will never be a queen."

Quite honestly, the move has the potential to be great for Snow and Regina's relationship. They are far beyond the point where Snow becoming Mayor would make Regina jealous or angry. She hasn't cared about that for three seasons. As long as Snow and Prince Charming don't try to move into her house, I think Regina will be just fine with it. Even better, she and Snow could work together to rule the kingdom of Storybrooke. She could offer Snow the guidance, advice, and encouragement that she could have been there to offer if things hadn't gone so sour between them.

This truly would be the second chance at a peaceful relationship with Regina that Snow has wanted pretty much since the day she and Regina met. This is her second chance to be a mother, her second chance to bond with her daughter, and her second chance to have Regina, who is technically her stepmother, in her life as a friend and mentor. Snow wanted to build a life in Storybrooke so that she could stay with Emma, no matter the cost or the loss of her actual kingdom in the Enchanted Forest, and making her Mayor of Storybrooke would just be another way to make that happen. Just like Emma and just like Regina, Snow White deserves to finally have something go her way after how much she has lost.