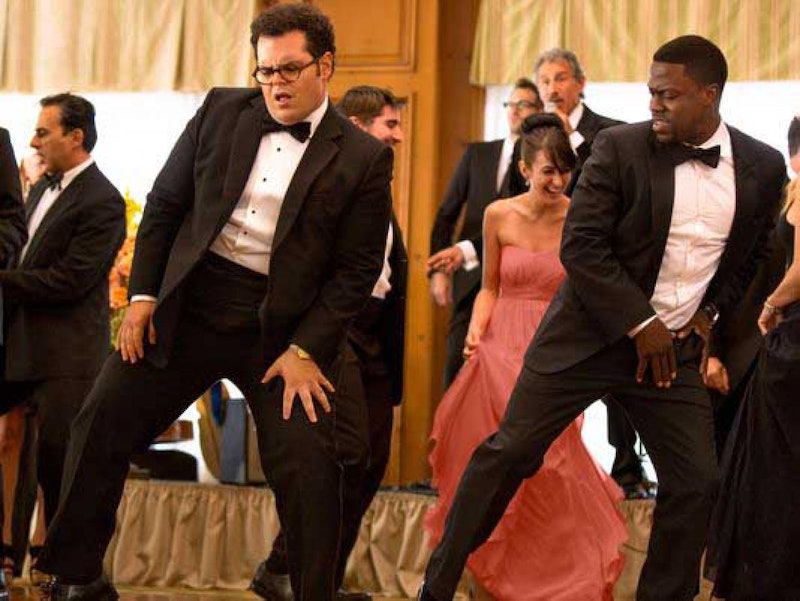 Despite The Wedding Ringer almost lifting entire movie plots from other films, the recycled idea behind the movie will most assuredly do well in the box office due to its two meteorically-rising stars, Kevin Hart and Josh Gad. Nearly everything Hart touches turns to box office gold and Gad was the voice of Olaf in Frozen , so that pretty much seals the deal for audience domination. Rounding out the cast is none other than Kaley Cuoco-Sweeting, who also happens to star in the most popular comedy on television, The Big Bang Theory. She also plays herself in the movie.

The plot you ask? The slapstick rom-buddy-com tells the story of Doug Harris (Gad) a sweet but awkward fella who is about to get married and doesn't have a best man or groomsmen to be there on his big day. What's a groom to do other than hire Jimmy Callahan (Hart), professional Best Man? If you think this sounds familiar, just wait until you see the just-released trailer. By the looks of the clip, The Wedding Ringer is I Love You, Man, The Wedding Date and Hitch all rolled into one. It's even got the uncomfortable dining room table scenes from Meet the Parents.

Don't believe me? Let's take a look at all the similarities:

I Love You, Man

Look at this rag-tag bunch of groomsmen that were haphazardly assembled!

In both films, the gal the fella is marrying is a lot cooler than him. Yep. The Wedding Ringer is almost 100 percent the plot of I Love You, Man. Except in The Wedding Ringer the main man hires someone rather than trying friend dates and set-ups. Cripes, even the characters' names are equally nerdy, Doug Harris and Peter Klaven. Not to mention both films have their fair share of gay jokes. Oi vey.

Of course Gad and Kevin James need an awkward dance lesson. Come on now. Don't you know it's still sooooo funny to see two guys dancing together. LULZ. HOWEVER. In The Wedding Ringer, Gad is a master in ballroom dance and Hart is getting schooled!. IS YOUR MIND BLOWN? No one?

Lead Hires Individual For Wedding & They Actually Fall for Each Other

OMG WHAT IF DEBRA MESSING FALLS IN LOVE WTH THE GIGOLO SHE HIRED TO PLAY HER BOYFRIEND AT A WEDDING!?

OMG I WONDER IF THEY BECOME ACTUAL BEST FRIENDS?

Remember that time Ben Stiller set the whole back yard on fire in Meet the Parents?

Even the dining room looks exactly like the Fockers'! As far as we know, no cats were milked in the making of The Wedding Ringer.

Check out the full trailer here: