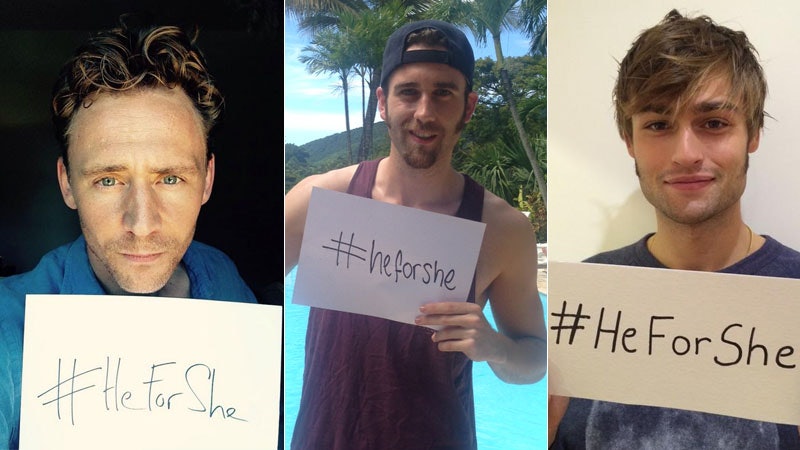 I honestly didn't think that I could love Emma Watson more than I previously did, but seeing her speech at the United Nations in support of a greater understanding of feminism and gender quality just about moved me to tears — and it's amazing to see that I'm not alone there. Not only did Watson get the world's attention with her brilliant speech, effectively using her celebrity for an amazing cause that needs all the support it can get, but she's also helped start an entire movement of men and women alike standing up for what's right.

#HeForShe: A solidarity movement for gender equality, aiming to bring one half of humanity in full support of the other half, to show that we are all the same.

In an amazing show of support, dozens of male celebs have stood up in support of Watson and the cause, posting #HeForShe-dedicated messages on their Twitter pages to not only stand up for what's right, but hopefully to rally up their own fans to take action as well. While it's unfortunate that the term "feminist" has received such an undeserved, muddled connotation over the years thanks to the false idea that its a radical concept, hopefully, the fact that celebrities of all genders and ages are standing up for gender equality will help to show what feminism's true meaning, by definition, is — the advocacy of political, social, and economical equality of the sexes.

Here are just a few of the celebs who have stood up in support, so far:

Who'da thought Neville Longbottom would grow up to be such a badass? Love that he's standing up for this, and his former Harry Potter co-star Emma Watson.

The In the Flesh star tweeted out his support for fellow Brit Emma Watson's campaign as well, proving that even zombies have room in their hearts to stand up for what's right. Also, everyone go watch In the Flesh, because it's amazing.

Glee star Colfer has been outspoken about his views on feminism for years, and, just recently, praised the inclusion of strong female characters in films and books: "I’ve always been a fan of strong women in literature and film. I don’t think I’ve ever written about a weak woman in any of my books. And I just think the more powerful women we have, the better the world is gonna be, and more of an example we'll be setting." Go Chris!

The British YouTube star who's engaged to make-up maven (and my name buddy) Tanya Burr also stood up for his beliefs, and tweeted his support for the great campaign.

In addition to co-starring with Emma Watson in Noah, Douglas Booth also portrayed Romeo in Carlo Carlei's recent adaption of the classic Shakespearen play. Of course Romeo was a feminist.

Another Noah star, Crowe tweeted out his wordless support for the cause, proving that action really does speak louder than words. I applaud you, sir.

Of course Sandy Cohen was a feminist. There's a reason he was the best father on television back in the days of The O.C.!

As if we needed reason to love Tom Hiddleston more than we already do, the charming Brit managed to steal our hearts again not only when he tweeted out support for Emma Watson — in addition to quoting her speech on his Twitter later! — but he also had a great chat with Natalie Portman for ELLE about the meaning of feminism last year.

Considering Styles is on a unique platform of being able to not only speak to millions of his fans across the world, but also rally for change, it's amazing to see that he's stood up for this cause like so many of his celeb pals have. One Direction fan or not, it's impossible to hate on this.

He's always been an outspoken Emma Watson fan, so it's no surprise that Redmayne was one of the first to show support for this campaign. Go Eddie!

This is great, because he gets the message across with one short sentence. That's how simple the idea of gender equality really is, guys!

Did you just feel yourself fall a little bit more in love with Logan Lerman? Because I know I did.

His humor may be dark from time to time, but even Gaiman got serious for a moment to show his support for Emma Watson's campaign. He's also written extensively feminist works, most of which were actually broken down in a separate book titled Feminism In the Worlds of Neil Gaiman .

After a debacle over cosplaying, it's great to see Simon Pegg flat-out standing up as a feminist.

Whitaker submitted his support for the cause with an amazing quote attached.