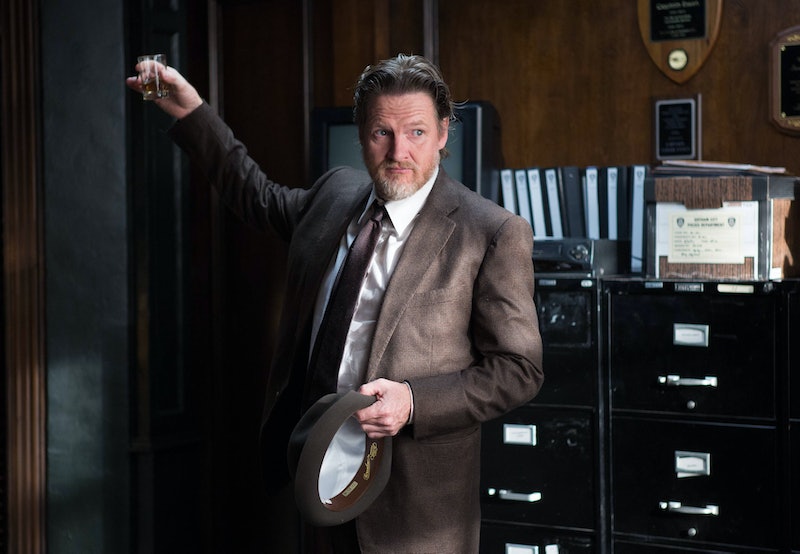 It's an unwritten law of police dramas that detectives always come in pairs: Benson and Stabler, Cagney and Lacey, Crockett and Tubbs — you get the picture. And while Gotham may be set in an alternative universe where caped vigilantes fight crime and supervillains control the streets, at its heart, it's still a cop show. Rookie detective Jim Gordon is our main protagonist, but he too has a partner on Gotham , Detective Harvey Bullock, played by Donal Logue. If that actor looks super familiar, it's because he's appeared in a whole lot of TV and films in the past few decades. Let's check out where you might recognize Donal Logue from. One hint: this isn't his first time working in a police station.

Logue started acting while attending Harvard, because he is apparently a genius as well as a prolific thespian. While in college, he acted in over 30 plays on campus. On Gotham, Logue's character, Harvey, is a veteran member of the city's police department. Over his years on the force, he's built relationships with some of Gotham's more notorious villains, including Fish Mooney and the Falcone crime family. He's the classic "bad cop" foil to Jim Gordon's principled, by-the-book "good cop."

If Donal Logue looks oddly familiar in his police uniform, don't be surprised. Gotham is not his first gig playing an officer of the law, and he's appeared on quite a few well-known shows in his career.

After Captain Cragen retired from the force last season, the Special Victims Unit was left without a leader, until Logue’s character, Lieutenant Declan Murphy, was put in charge. When we first saw Declan, he was undercover playing the seedy owner of a casino, so it was a bit of a shock to suddenly find him on the right side of the law, giving orders to Olivia Benson (aka the force of nature known as Mariska Hargitay). Declan only lasted at SVU through the end of last season, however, and now Olivia has taken her rightful place as Sergeant, so all is well in the world. In addition to SVU and Gotham, Logue has also had large roles playing cops on Terriers, Copper, and Life, as well as in the movie Zodiac. At this point, he's got the part down cold.

On Seasons 5 and 6 of Sons of Anarchy, Logue played Lee Toric, a former U.S. Marshall (so sort of a police officer!) who was fired for excessive brutality — not exactly unusual in FX's world of biker gangs and their associates. Lee's main purpose on the show was to antagonize and torture his brother-in-law, Otto Delaney, an imprisoned SOA member. Lee was out for revenge because Otto killed his own wife (Lee's sister). Like most characters on this rather grisly show, Lee came to an untimely and bloody demise when, after he attacked Otto in a fit of rage, Otto killed him. The lesson: Do. Not. Mess. With. SAMCRO. Even in prison, those dudes are deadly.

Logue has played some tough guys in his day, but the part he's perhaps best known for is a very different character: Sean Finnerty, the lovable, fumbling dad on Grounded for Life. Grounded was a network sitcom (complete with laugh track) that aired 91 episodes from 2001 to 2005. In the show, Sean and his wife Claudia are parents to three kids, but they were teens themselves when they got married and had their first child, so in some ways, they are maturing alongside their offspring.

As you could probably guess, there is decidedly less violence and crime in this series than in Sons of Anarchy, Law & Order: SVU, or even Gotham, but there is more broad humor and life lessons. Depending on what you're into, you can get your Donal Logue fix in any flavor you choose.