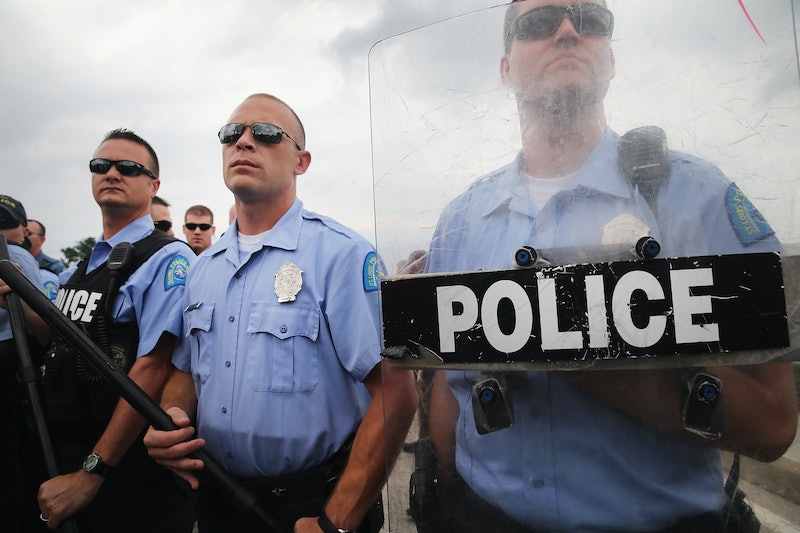 On Saturday night, a Ferguson police officer was shot in the arm in the midst of this week's reignited protests. The St. Louis Police Department released a statement later Saturday, saying that the shooting took place just after 9 p.m., that the officer's injuries aren't life-threatening, and that the suspect hasn't yet been identified.

The St Louis Post-Dispatch reported Saturday night that the officer shot is female. The shooting reportedly occurred when the officer was at the Ferguson Community Center.

It's been almost two months since the death of Michael Brown, an unarmed black teenager whose death sparked protests that flared for weeks. The officer who shot Brown, Darren Wilson, is being considered for charges by a grand jury, whose decision could take months.

In the last week, violent protests have once again shaken the town after a Brown memorial was mysteriously destroyed, and police chief Thomas Jackson unsuccessfully apologized to the people of Ferguson and Brown's family. Jackson told the crowd:

I'm sorry, and I said that from my heart ... I had to get that off my chest. It's been sitting there for two months ... You have every right to be angry and upset.

The crowd called on Jackson to resign.

Insisting he wouldn't resign, and attempting to join protesters in the streets, Jackson's appearance Thursday only sparked more violence and a handful of arrests.

More like this
Scotland's First Period Dignity Officer Is... A Man?
By Darshita Goyal
'The Capture' Is Finally Back – & S2 Looks Tense AF
By Sophie McEvoy and El Hunt
The Lionesses Are Calling For Equal Access To Football In Schools
By Sophie McEvoy
25 Things I've Reduced My Life To, In Addition To WFH In My PJs
By Ginny Hogan
Get Even More From Bustle — Sign Up For The Newsletter