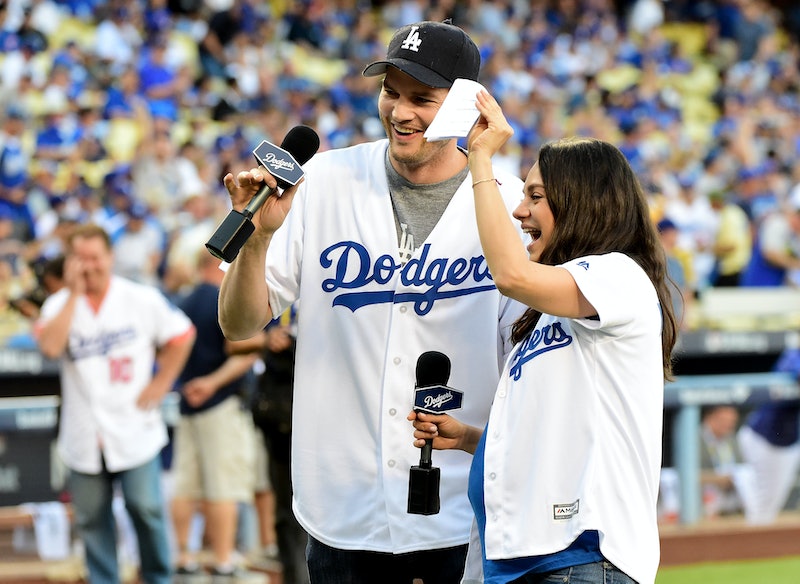 Awwww! Ashton Kutcher and Mila Kunis' baby (aka the most beautiful human to walk the earth probably) isn't born yet, but Kutcher is already the coolest dad ever. Last Wednesday, Kutcher shared a photo from the set of Two And A Half Men, which Us Weekly reports is in the middle of filming Kutcher's character's "gay" adoption storyline. Kutcher plays Walden Schmidt, who's living room has been completely overrun with kids' toys, giant stuffed animals, and a life-size C-3PO figure. As Us Weekly's Sophie Vokes-Dudgeon writes, the photo from the set probably isn't too far off from Kutcher and Kunis' real-life baby's room. The couple reportedly finished putting the "finishing touches" on their baby's room a month ago, and Kutcher is already preparing for the big day. A source told Us Weekly that Kutcher's baby bag is already packed, and he's already planned his route to the hospital.

According to E! News, Kunis is just as excited. Last August, a source said she's been busy "making sure the house is prepared and the nursery is stocked[...]She's been very involved in everything. She really wants to be a hands-on mom[...]She's not nervous at all[...]She's been really calm and chill." On Wednesday, she was reportedly spotted making a Target run and stocking up on the goods. Welcome to the world, gorgeous future human!