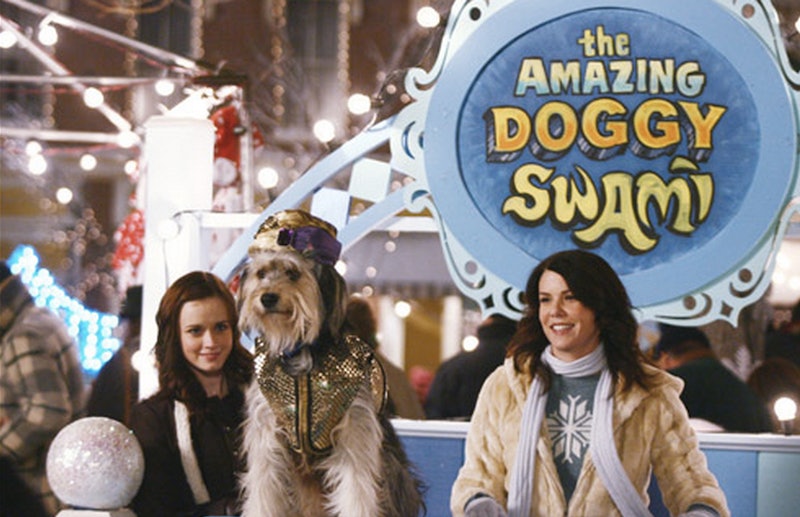 It seems as if every episode of Gilmore Girls is jam-packed with pop culture references. I'm sure you'll have fun looking each one up when you immediately start binge-watching the series when all seven seasons hit Netflix starting October 1. However, one of the most memorable for its inexplicability is Lorelai's dog on Gilmore Girls , Paul Anka.

In a move that wouldn't surprise anyone familiar with Lorelai and Rory Gilmore, Lorelai decided, in the second episode of Season 6, to name her new dog Paul Anka (after the singer-songwriter most famous in the 1950s through 1960s) when she first adopted him. If you would like your viewing of Gilmore Girls to be spoiler-free, you should stop reading immediately.

OK, now that we've got that out of the way, I can remind you that Lorelai adopted Paul Anka when her life felt a little empty after she and Rory had their huge falling out. This was because of the stolen boat incident with Logan and Rory's decision not to return to Yale at the end of Season 5, which continued into Season 6.

It was kind of weird for Lorelai to have a dog of her own, considering she and Rory could barely take care of themselves sometimes and the fact that a hamster, rabbit, and turtle all died under her care. What was even stranger, though, was the fact that she named her dog Paul Anka in the first place, instead of a traditional dog name like Fido or Sparky or Buddy.

Executive producer, writer, and director on the series Daniel Palladino decided to name the dog in honor of the legendary musician after hearing one of his albums play in Starbucks. "It just seemed like … maybe Lorelai would have gone into a coffee place and heard this weird Paul Anka album and would have thought to name her dog Paul Anka," Palladino told The Chicago Tribune back in 2006.

So Paul Anka the dog and Paul Anka the singer may seem like they only have a name in common. However, the two are more alike than you think. Let's see how they size up in four essential categories.

As I previously mentioned, the dog Paul Anka was featured fairly prominently throughout Season 6. However, as soon as Lorelai and Rory mended their relationship and once again became the loving mother-daughter pair we know and love them for, we didn't see as much of Paul Anka, and he was virtually absent from Season 7 of the show.

2. The sounds they make

Because Lorelai's dog is, well, a dog, he barked occasionally. However, animals that appear in movies and on TV shows are so well-behaved since they're carefully trained. I don't remember the dog Paul Anka ever being too noisy.

In fact, I'd argue that the real Paul Anka is more of a reveler. He's famous for making noise in the form of music, of course, with hits that include "Put Your Head On My Shoulder," "(You're) Having My Baby," and the song with the most perfect title ever, "Puppy Love." Have this guy sing to a room full of 60-something women, and you're bound to hear lots of noise coming from them, too.

Obviously, the dog Paul Anka is a proud resident of Stars Hollow, Connecticut. However, as a Polish Lowland Sheepdog, more commonly known today as a PON, his breed actually originated in Poland some time before the 16th century.

The real Paul Anka is so ingrained in American pop culture that you, like I, would naturally assume he was born in the U.S. However, Anka is actually originally one of our neighbors to the north as he was born in Ottawa, Canada on July 30, 1941. Anka left Canada for the U.S. in 1956 to pursue his music career, and the rest, as they say, is history. Though Anka became a U.S. citizen in 1990, his hometown has honored him with his very own street, Paul Anka Drive, so he'll figuratively and literally always be a part of Ottawa.

As a sheepdog, Paul Anka has a shaggy coat of white fur with some black and brown tresses on the top of his head and back. It's not the prettiest coat, so he always looks a little scrappy, lovable, but still scrappy.

On the other hand, the real Paul Anka has gone through a bit of a hair transformation. When he first hit the music scene, he had a lush bouffant. Hey, it was the '50s. By the '70s, his hair grew horizontally instead as he grew it out with some killer side burns to match the style of the times. These days, Anka's hair is shorter, and you can see a lot more of his forehead, if you know what I mean. Unlike the dog Paul Anka, there's not a speck of white on the 73-year-old's noggin. I wonder how he pulled that off...

Whether you're more of a fan of the dog Paul Anka or the real Paul Anka, I think we can all agree that the fact that they were both a part of Gilmore Girls makes them even better.