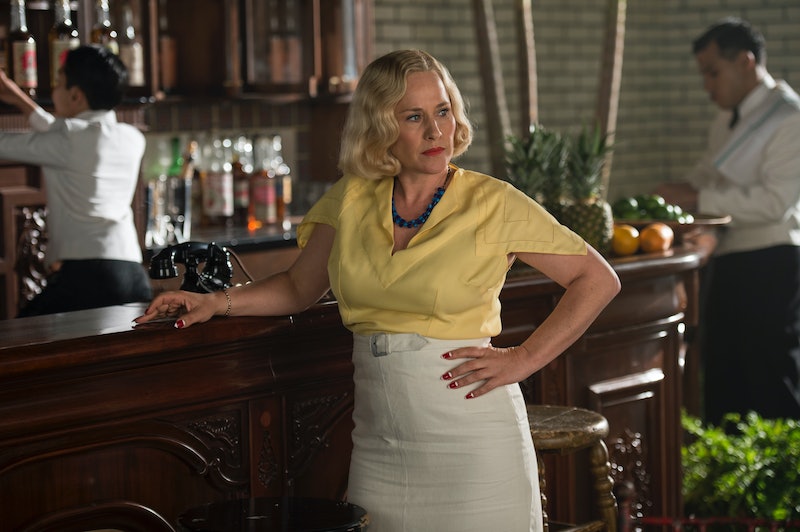 There goes Nucky's big Bacardi deal and the most admirable female character on the show. Boardwalk Empire Season 5 premiered strong for its women, but it's quickly fallen right back to being a male-centric series. On Sunday night, Boardwalk Empire killed Sally Wheet and it was the worst send-off the series has ever given. Not just because Patricia Arquette played her flawlessly and she was the most badass woman Boardwalk's introduced to-date, but because she really didn't need to die and it was a major setback in the HBO series' push to feature more independent, strong women in Season 5.

Really, this just wasn't fair. After a rainstorm in New Jersey keeps Nucky from going to Cuba to meet with Mr. Roni, Sally goes in his place to deliver the "good faith" deposit on the Bacardi rum deal. So, of course, because Nucky trusts her to do his business and hold her own amongst the big fish, she needs to die, right? According to Boardwalk Empire, that's exactly how things are. Everything goes well with the deal, even though she gets a sense that Roni isn't telling her the whole truth about his concerns about the revolution in Cuba. But it's on the trip back to Havana and we're forced to say goodbye to Sally Wheet way too soon.

She gets pulled over by the military on her way back Havana because of a recently implemented "curfew" that she wasn't aware of. At first things seem to go well, Sally cooperates with the men, answering their questions about where she'd been and why she went there. But then she tries to bribe them by asking, "How much?" and then the shit hits the fan. When they ask her to leave their vehicle, Sally again cooperates and turns on some of her charm, saying she'll take care of them if they come into her bar with unlimited drinks. And that just makes things worse — the captain tells her that she's what's wrong with Cuba for thinking they just want a drink and for doing business with Roni who underpays his workers.

So, of course she's not pleased — she went out on a limb to cooperate, even if she did something sketchy by offering to bribe these guys. And when she tells them that she's fine with not going back to Havana and will stay elsewhere for the night, they try to grab her to arrest her. At which point she swipes a gun and holds them only to end up getting, off-orders, but one of the commander's men.

It's unceremonious, it's sudden, and it's painful to watch Boardwalk kill Sally Wheet off the series because she did something that any man, including Nucky, would try to do. I mean, I'm not condoning bribing military officials, but that's the world Boardwalk lives in. And now we're one badass woman short because she tried to wheel and deal in a man's world.