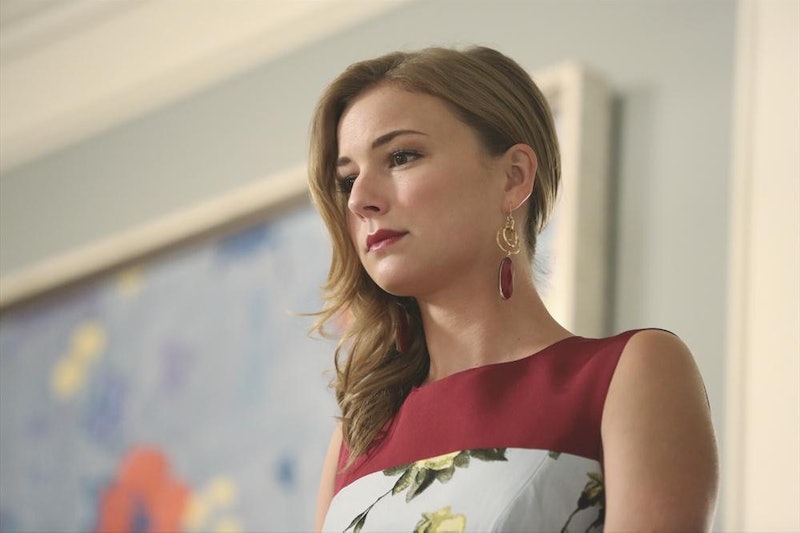 Don't worry, you're not the only person scratching your head about the Revenge Season 4 premiere "Renaissance." That's what comes with having an unidentified, surprise time-jump sprung on you. While spoilers and promos for Revenge's new season focused on how the series would transition to following Victoria's revenge narrative, it never said anything about an extensive time-jump. But that's what we got and apparently, everyone we thought we knew on Revenge has become entirely different people. Except for Daniel, because Daniel's just always been a total jerk.

What exactly is going on in the Season 4 premiere? Well, you can probably tell that a considerable amount of time has passed (even if, you know, no one gave us the courtesy of letting us know). You also might be getting a little confused trying to catch up with where Emily and the rest of the Hamptons' elite have gotten to since the Season 3 finale aired and how exactly they got there. Or at least feeling crazier than Victoria Grayson right now. So, what's everyone up to on Revenge? Here's your handy cheat sheet:

— Jack somehow became a police officer since we last saw him.

— Emily & Nolan are playing the Graysons... as total assholes. (So maybe just about right?)

— Victoria has escaped the sanitarium with the help of Lisa Simpson, er, Yeardley Smith.

— Charlotte is now officially messed up and she's living "under Daniel's thumb" (and in his apartment).

— David Clarke is in the Hamptons and he's got Victoria, but this isn't a loving reunion.

With all that going on, you'd be forgiven for feeling like this: