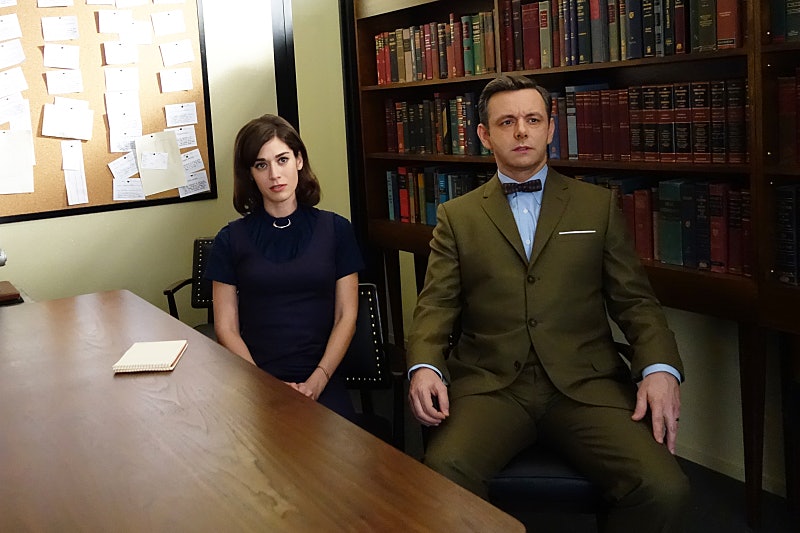 Well, folks, the second season of Masters of Sex has ended, and it will be almost another year before we all get more updates on the progress of the infamous study. A lot happened on the final episode, including an effort to weave John F. Kennedy and his inauguration into the storyline in ways that felt more contrived than useful, but the main takeaway is that Bill is an ass. Even, it seems, to Virginia.

The finale episode wasn't quite the explosive blockbuster one would expect after last week's developments — true, Libby's affair with Robert continues along with her character development (finally), but there's been no scandal yet. Meanwhile Barb and Lester are getting closer while Langham gets his feelings hurt when Flo tells him that she'd be embarrassed to introduce him to her wealthy, influential family. But the main storylines this week revolve around Bill and Virginia — and the way Bill completely screws her over.

Virginia's ex-husband George has returned from Europe determined to see more of their kids, and he's not afraid to drag Virginia into court and do whatever it takes to show she's an unfit mother in order to do it. Panicked and backed into a corner, Virginia comes up with a plan to give George what he wants — majority custody of the kids — for now, until the CBS segment aires and she can prove that her work is legitimate, not the sleazy, immoral mess George's lawyer would try to make it out as. This is frankly a terrible plan, but it is probably the best strategy she has under the circumstances. (Her ex-husband really just sucks.)

Unfortunately for Virginia, Bill has been doing a lot of thinking about that CBS segment. After watching it and seeing just how misleading and censored it is, he decides to get ahold of Dr. Kaufman's upcoming book, seeing as how Dr. Kaufman's competition is the reason they decided to do the segment in the first place. Reading it, he realizes Kaufman's science is nowhere close to his and Virginia's level, and so he arranges for Barton to send an advanced reader's copy to a rival television station, who immediately produces a segment and causes CBS to pull the plug on the Masters and Johnson segment since it would look like old news.

Virginia, understandably, loses it. Bill tries to comfort her with the worst advice anyone has ever given to a mother who will now only be seeing her kids once a week and every other weekend: "All we can do now is go back to work."

I am trying very hard not to strangle him. Very, very hard.

The truth is that Virginia has done a lot for Bill over the years. Most recently, she helped fix his impotence, at least for time being. She's supported him, personally and professionally, and it's been shown time and time again that without her, his study is impossible and his emotional life goes to hell. So even though he didn't know about her plans when he went and sabotaged them, the fact that he didn't clue her in on what he was doing is just a completely sucky move. Bill clearly respects Virginia, but he doesn't treat her like the partner and equal that she is, and we've seen it come up again and again throughout the show. And then, just when it seems like he might be getting better about it, he goes and completely screws her over because he couldn't trust her enough to clue her in before she made plans based on faulty information.

In other words, Bill is an ass. And we're going to have to wait until season 3 this time to see if he can redeem himself.