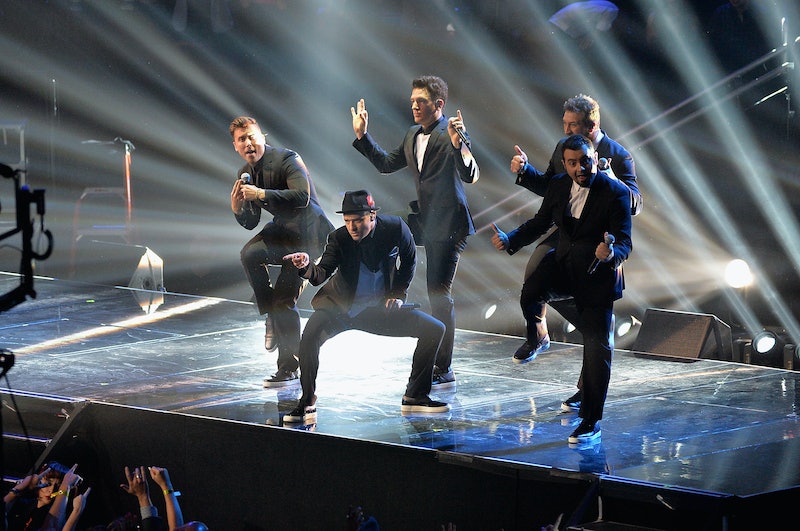 Last night's 'NSync "reunion" at the VMAs was basically a five-second blip in Justin Timberlake's 20-minute takeover of the show, but oh what a sweet blip it was. But in case you haven't had enough (and, come on, we know you haven't), JC Chasez spoke out about the process of getting the group back together. We imagine they each received a call at midnight on the big red 'NSync phones they keep by their bedsides. It was either that or a mass text reading simply "ASSEMBLE." JC told Ryan Seacrest:

You know, it was a matter of time. Everybody would ask us, ‘When are you guys going to do something?’ First of all, it was the worst kept secret ever, [but] Justin gave me a buzz and he said, ‘Hey man, listen. I’m getting this award and they have given me a pile of time to perform and we started our careers at MTV and I think we should get the band back together.’

As for the sadly brief nature of the reunion, Chasez attributes it to the band's feeling that they wanted to keep the performance as a celebration of JT.

It really was about him and all that he’s accomplished, but he wanted to acknowledge that part of his career so we all decided to do it.

As for if the band got those same early-2000s butterflies that we did upon seeing the group back together again?

Literally, two minutes after seeing everybody you feel like no time has passed ... Essentially everybody has remained the same and we all see each other at different times … but this was the first time we had a rehearsal together in 10 years, so everyone was going, ‘Can we go through this one more time slowly?’… so that part was pretty funny.

Chasez also goes into the craze that followed after the reunion was leaked almost immediately, commenting that there must be "cameras in the ceiling."

Chasez unfortunately put a kibosh on our nostalgic dreams of an 'NSync reunion tour, but if it helps he said it pretty sweetly.

No … Look, again … it was just about five guys who were great friends who spent 10 or 15 years together touring and we … wanted to give that back to our fans, but we were there mainly to support Justin.”

Tearin' up our hearts, over and over again. And you've gotta admit, they've still got moves.