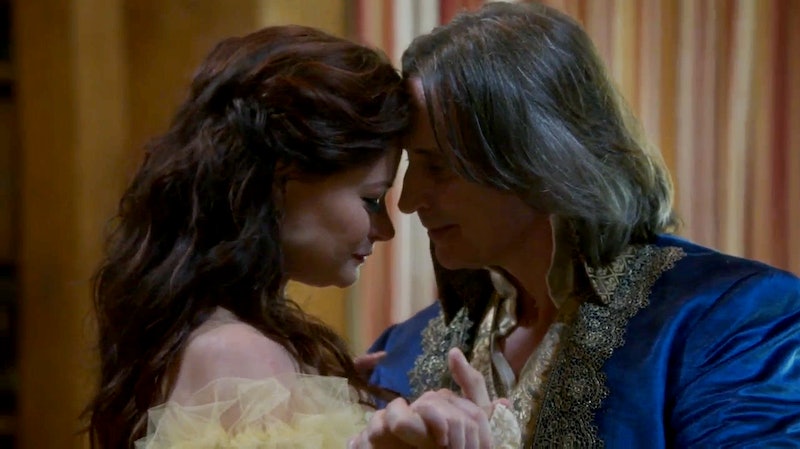 If you weren't already excited that Once Upon a Time would be tackling Frozen in the first arc of Season 4, then you might have been anticipating something a little different from the premiere. No, I'm not talking about the next step in Captain Hook and Emma Swan's relationship. I'm talking about the fact that Rumpelstiltskin and Belle would re-enact the Beauty and the Beast dance from the iconic Disney movie. Belle and Rumpel, for those who have forgotten, got married in the Season 3 finale and Belle decided to celebrate their honeymoon by breaking into and squatting in a mansion, which just so happened to have a ballroom similar to the one from the movie. Rumpelstiltskin was probably physically incapable of resisting the reference.

With a snap of his fingers, Rumpel placed Belle in the familiar dress, himself in the familiar suit, and started a record player that released the melodious sound of the familiar song, "Tale as Old as Time". But exactly how accurate was Once Upon a Time's whole scene reference to the movie? Was it a shot-by-shot remake or was it more of an homage? Well, to be fair, it was kind of both.

It goes without saying that Mr. and Mrs. Gold were outfitted in costumes that were as close to the animated version as the costuming department could possibly find. Sure, Rumpel was wearing shoes and didn't have his hair back in a ponytail, but, then again, Rumpel also had much less hair everywhere than his Disney counterpart.

Everyone knows the really important part of the ballroom was the chandelier and Rumpel made sure to light that baby up before he and Belle got started. Not to mention the fact that if you look closely, the floor that Rumpel and Belle were dancing on is similar to the design of the floor in the center of the Beauty and the Beast ballroom. Now that's what I call an homage.

From the spin that caused her dress to flash in that oh-so-perfect way to the many times he twirled her to the gentle press of her forehead against him, the dance itself was everything we remembered and more. The only way it could have gotten more accurate is if Rumpel had magicked up a singing teapot to add words to the melody they were dancing to. As it is, I think he did his absolute best to make this the kind of wedding dance that Belle would always remember.

Don't get me wrong. The Frozen scenes and references were absolutely perfect and I already can't wait to see where Once Upon a Time takes that arc next. But Rumpel and Belle's iconic dance was every bit as iconic as we dreamed it was going to be and it's worth watching again and again and again. (In between repeat watches of Beauty and the Beast, of course.)

Relive the beautiful moment from the Disney movie and Once Upon a Time below.