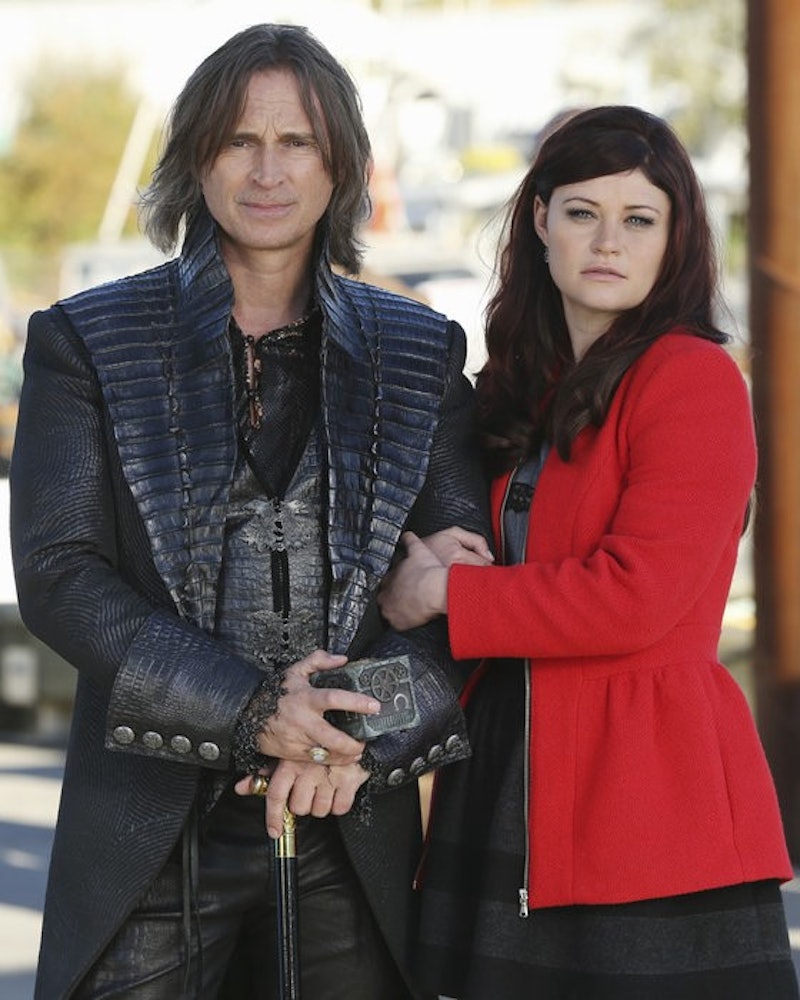 Ever since Elsa made her icy debut back in Once Upon a Time ’s Season 3 finale, it’s all anyone wants to talk about — ironically, making Frozen a pretty "hot" topic these days. (Weather humor!) The Internet has flooded with many different theories as to how OUAT will choose to handle the adaption in Season 4, ranging from Anna’s fate to predicting Elsa’s motives. And while I freely admit to getting caught up in the Frozen fanfare myself, I think it’s just as important to remember the original inhabitants of Storybrooke and consider what kind of exciting plot developments lie in store for them next fall. One story arc in particular that I’m anxious to see further unfold involves my all-time favorite OUAT ‘shipping couple Rumpelstiltskin and Belle. Or Rumbelle, if you will.

Now that these two crazy lovebirds have finally tied the knot, fans need something else to speculate about, so what could that be? Babies! Could a Rumbelle baby finally be on its way? It certainly seems possible enough given that this series doesn’t exactly shy away from fairytale pregnancies — as proven by Prince Charming and Snow White’s recent bundle of joy. Plus, Henry hasn’t been introduced to a new family member in a while, so he’s kinda due for an aunt or uncle to be thrown into the mix.

But could a baby actually be in the cards for Rumbelle next season? Emilie de Ravin recently hinted that Belle will, in fact, find out about Rumpel’s little dagger switcheroo trick from Season 3 and that a fight will ensue. However, she assures fans that “Belle is very, very forgiving” on the matter, so it shouldn't seriously affect their newlywed bliss. Kinda seems like a big thing to forgive, doesn’t it? Perhaps there’s another force driving her decision. Maybe she’d have no problem kicking her new husband to the curb, but the father of her unborn child? Well, that might be an entirely different story. It would certainly account for her decision to be so forgiving, even by Belle’s standards. But how would this affect Season 4? Well, for starters…

The Introduction of the Anti-Savior?

… I think it’s safe to say that the Dark One is officially back in business. Belle and Rumpel are basically the opposite ends of a coin, so it would be interesting to see which traits their child would inherit from dear ole daddy. Granted, Baelfire turned into a pretty great guy, however, let’s remember that he was born way before his father ever took a turn down this dark and daggered path. The true spawn of the Dark One may be easily corruptible, especially if he/she possesses strong magical abilities. (All magic comes with a price, dearies.) And since this series loves a good time jump, maybe the kid could somehow age quick enough to pose a serious threat. If Emma is the true Savior, then perhaps a Rumbelle baby would be the ultimate anti-Savior.

Or, you know, it would just turn out to be a really cute baby.

Like I said, this baby would most likely possess some serious magical abilities even from inside the womb. It would be great to see Belle inherit some of those powers during that nine month time period. Just watch out for those pregnancy hormones, Rumpel.

Having a child will once again make Rumpel extremely vulnerable. Trying to keep a regular infant safe sounds like a hard enough task, but the gold-spinning trickster has made enemies everywhere who all want some form of payback. Nothing would accomplish that more than by having his child kidnapped — or worse. And if Elsa does, in fact, hold a grudge against Rumpel for keeping her locked up, this would give her a perfect opportunity to seek revenge.

The Next Big Love Story

There’s always the possibility that Rumpel and Belle's child could one day fall in love with Snow and Charming’s newborn prince. I know what you’re thinking, and yes, technically they’d be related since they’d both share Henry as a nephew. But they’d be from completely opposite ends of the family gene pool, so there'd be absolutely no blood relation whatsoever. (This is Once Upon a Time after all, not Game of Thrones.) Bottom line — it could totally happen. In case you haven't noticed, Storybrooke is an awfully small town and when there only seems to be one other person in your age group, what else do you expect to happen?