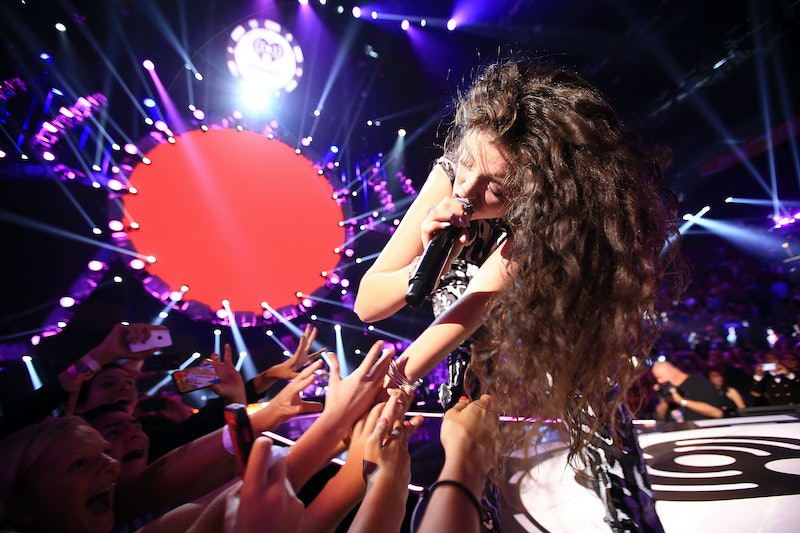 From the moment I heard that Lorde would be curating the Mockingjay album, I knew this was going to be the greatest soundtrack to any movie ever. All right, that might be a slight exaggeration, but Lorde has a sound that lends itself very well to the dystopian desperation of the Hunger Games universe. Although I speculated as to what Lorde's "Yellow Flicker Beat" could possibly be about, nothing really prepared me for the song itself when it was released on Monday. Lorde's "Yellow Flicker Beat" single is a perfect introduction to Mockingjay and a perfect compliment to the film series. If the rest of the Mockingjay soundtrack is anything like this, then you're going to love it as much as you'll love the movie.

The song begins in a somber acoustic before the beat kicks in. The first line that Lorde released, "I’m a princess cut from marble, smoother than a storm", is sung in a haunting opener that gives you shivers long after the song has begun in earnest. By the time Lorde starts singing about the "red, orange, yellow flicker beat sparking up my heart", you're practically ready to rebel just for the sake of rebelling now that you have the perfect soundtrack to go with it. With lyrics like "they used to shout my name; now they whisper it" and "I've got my fingers laced together and I've made a little prison and I'm locking up everyone who ever laid a finger on me," Lorde really went the extra mile to encapsulate the entire spirit of Mockingjay and of Katniss as the iconic symbol of the rebellion.

Lorde uses the girl on fire imagery to great effect in the song, as well as making use of her trademark drawling voice, lingering melodies, and amazing background singers. Ultimately, Lorde’s song will not only make you think of Katniss Everdeen, who will be tested as she never has been before in Mockingjay, but it’s also an anthem for everyone everywhere who has ever felt beat down by the world around them. Just listening to the song made me feel like a certifiable badass, so I already can’t wait to hear exactly where and when in the movie “Yellow Flicker Beat” will be played.