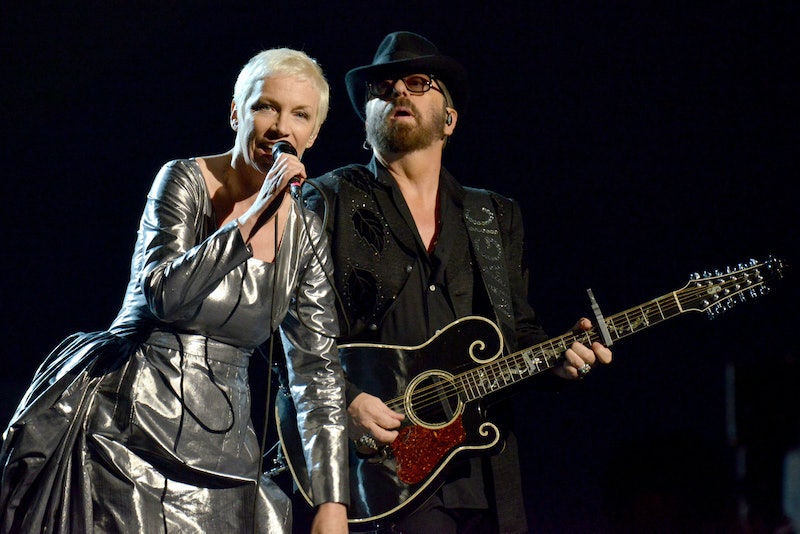 In my mind, Annie Lennox can do no wrong. She is a golden goddess sent down to bless the world with love, music, discourses on gender performativity, and unparalleled facial expressions. Fans of the Queen Bey, however, may find fault with one of Lennox's statements. In a recent interview, Annie Lennox called Beyoncé "feminist lite" and questioned the pop singer's motives for adopting the term. Now, don't sick the Beygency on me, but Lennox has a salient point here.

Lennox sat down with PrideSource to discuss her latest album, her work as an activist, and her gender politics. The journalist asked her, as a long-time feminist, how she felt about Beyoncé's FEMINIST statement at the VMAs:

She goes further, and references some of the conditions of feminism's mainstreaming.

I see a lot of it as them taking the word hostage and using it to promote themselves, but I don't think they necessarily represent wholeheartedly the depths of feminism — no, I don't. I think for many it's very convenient and it looks great and it looks radical, but I have some issues with it. I have issues with it. Of course I do. I think it's a cheap shot. I think what they do with it is cheap and ... yeah. What can I tell you? Sex always sell. And there's nothing wrong with sex selling, but it depends on your audience. If they're 7-year-old kids, I have issues with it.

There it is. Yes. Thank you Annie Lennox.

While I can acknowledge that Beyoncé's Video Vanguard Performance was a spectacular feat, it had its screaming conditions. Shortly before "Feminist" flashed on stage during the 16-minute display, Beyoncé and her backup dancers pole-danced to "Partition." You can argue all day long that was instance of the pop star championing her sexual subjectivity. It is, however, a BIG old mixed message. To kids watching along, this display further condones the objectification of women as entertainment. It substantiates that the female body is a commodity, a diversion, and ultimately, something to be acted upon. Whereas Lennox has always eschewed the idea of being a "dancing doll," as she puts it, flouting the idea that being a singing female is about fetishization rather than self-expression.

An international pop star like Beyoncé, whose image is meticulously crafted by a battalion of publicists, managers, creative directors, and record executives can't be seen as a feminist in a vacuum. Beyond being pro gender equality, Beyoncé is a product to be marketed to her public, young and old. She can easily call herself a feminist, but package and reinforce the gender political status quo at the same time. Particularly when, as Lennox points out, your audience is largely made up of kids, this brand of "lite feminism" is reinforcing traditional gender norms. You know, the ones that Beyoncé lists off in the classic Destiny's Child song Cater 2 U.

As Lennox identifies, popular culture's feminist renaissance is "a process. It continues to be reframed, and necessarily so, because people's relationship to the word has been ambivalent over the last few decades." In order for that process to flourish, public figures need to discuss gender politics. Whatever my ambivalence may be about Beyoncé's performance, she do contribute to that process. The words of Chimamanda Ngozi Adichie at the beginning of "Flawless" will be absorbed by little girls and boys. Her adoption of the term "feminist" will hopefully inspire a new generation of young women and men to self-identify.

In 2014, public figures are jumping on the feminist bandwagon. Beyoncé's VMA Performance or Emma Watson's HeForShe campaign are great examples of this effect. Mainstreaming feminism has, as all movements gone mainstream do, its benefits and drawbacks. A new generation may come of age in which feminism isn't a dirty word for young women and men. However, it can, regrettably, just add to the flurry of damaging mixed messages sent to people the world over. What's most important is that people continue to talk about gender politics, to reshape the definition of feminism, and to be critical of the actions of our public figures. If the cultural industry can't entirely pin it down, then it can't co-opt it.