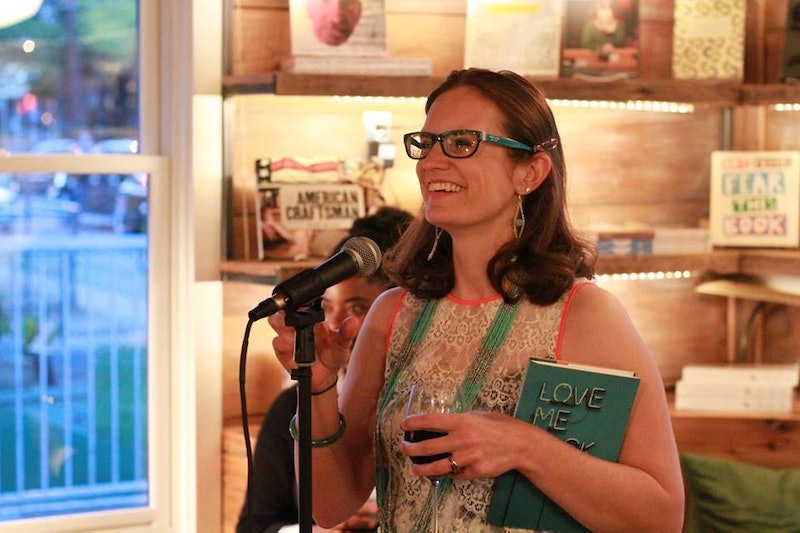 It seems like a pretty self-evident thing that you shouldn't leave reviews of books you haven't read, but not everyone has gotten that memo. Last week, after author Merritt Tierce revealed she once donated Rush Limbaugh's tip to an abortion charity while working as a waitress, people started leaving one-star reviews for her novel, Love Me Back , on Amazon.

Tierce, whose novel is partly based on her own experiences waiting tables at a pricey Dallas steakhouse, didn't include the Rush Limbaugh's anecdote in the book, but did tell the story during a radio interview. She waited on Limbaugh twice while working at the steakhouse, and both times, he left her a $2,000 tip on a modest bill, she said, but as a pro-choice woman she felt uncomfortable accepting the money and so donated a portion of it to TEA Fund, an organization which helps low-income women pay for abortion.

Predictably, conservative news sources weren't pleased when they heard the story, and don't have many nice things to say about Tierce. TeaParty.org calls Tierce "spiteful." Brietbart News Network calls says she's an "ingrate" and describes her donation as "spitting on the generosity of a conservative." Life News quotes statistics that incorrectly suggest most women regret their abortions then says,"Sadly, that is exactly what Tierce is paying for with Limbaugh’s money." Meanwhile the Christian Post, in referencing Tierce's New York Times piece about why she had her abortions, claims that Tierce's second abortion was due to being "angry at the man she was seeing," rather than, as Tierce says, the fact that this man was "emotionally abusive." Seriously, guys? Seriously?

And the list of upset conservative media outlets goes on and on and on.

But it seems that some conservatives are not just content to let their media outlets call Tierce names; instead they also feel compelled to try to negatively affect her livelihood by leaving one-star reviews of her novel.

As of this writing, Tierces's book currently has more one-star reviews than five-star reviews on its Amazon page, but even more tellingly almost none of the reviews are anywhere in between; out of 56 total ratings, 47 are either the best or worst rating available. Looking at the one-star ratings turns up reviews like this:

Nor is this the only review to reference the story of Tierce donating Limbaugh's tips.

Other reviews do not mention the incident by name, but it does seem telling that literally all of the one-star reviews for Love Me Back were posted no sooner than September 23, the day that Tierce's anecdote about donating Limbaugh's tips hit the news; multiple four- and five-star ratings were posted before that date. This, combined with the way many of the one-star reviews don't offer any details about the book, raises questions about whether these people were motivated to post low ratings because of the news story — and whether they've actually read the novel.

And then there was this:

New goal: Read anything that Internet trolls claim has "misandry in the subtext."

But in all seriousness, the whole situation sucks. It's insulting enough that people would feel entitled to publish reviews for books they haven't read, but it's especially awful given that those negative rankings could affect sales for Tierce. Most people checking out the book probably won't try digging into the story behind those one-star ratings. They'll just note that a lot of people really seem to dislike the book and factor that into their decision — which will almost certainly cost Tierce some sales.

Merritt Tierce made a decision, years ago, about what to do with money she had earned. The money was hers and the decision about how to spend it was hers. She chose to donate it to an organization she believed in, and for that people who disagree with her choice are trying to interfere with her career. Hopefully, the impact from these reviews will be minimal, but the mere fact that people chose to lash out this way is troubling.

Books are not about snap judgements, or about putting things into tiny boxes. Books are about exploring topics deeply and thoughtfully, which makes it especially insulting for people to rate books based on political allegiances and biased personal feelings about an author without having read her work.

So if there are any people out there who actually did read Love Me Back and didn't post a review afterwards, maybe consider heading over to the Amazon page and writing what you thought. Because whether you liked it or hated it, it's better for everyone when the reviews are real.