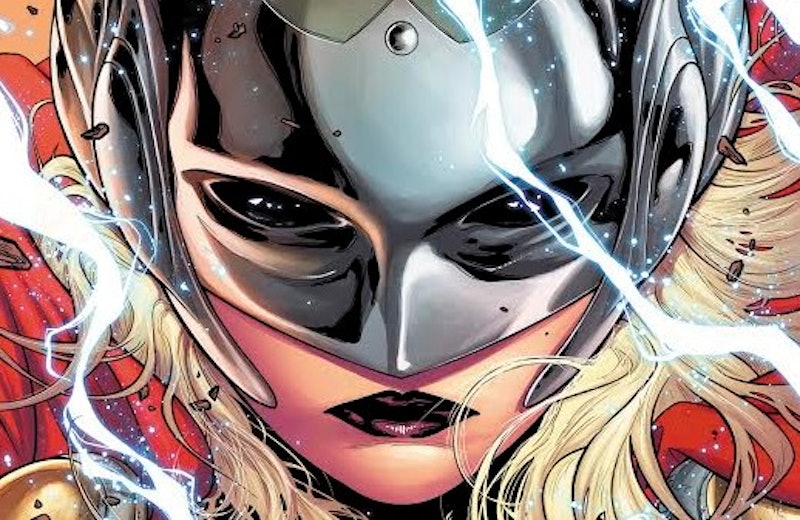 In what feels like an “it’s about time” move by Marvel Comics, the cover art for the new Thor was released on Monday morning. During the summer, Marvel announced that the new holder of the hammer would be a woman. Whoopi Goldberg, who announced the gender swap on The View, said it best when she said, “The God of Thunder, he messed up, and he’s no longer worthy to hold that damn hammer of his.”

The cover art that Marvel released will be seen on the first issue of Thor #1, out Oct. 1. The writer of the comic, Jason Aaron, told HuffPost Entertainment that a female Thor “is where it’s been headed for the past couple of years.” He also implies that the new Thor will have slightly different powers as the old Thor, “but it’s still, at the heart, a Thor story.” Here’s everything else we currently know about the new Thor, and her introduction into the Marvel Comic.

She’ll be known as Thor

Not Lady Thor, not Thorette, not She-Thor, just Thor. Just because she is a woman, doesn’t mean her name shouldn’t be any less powerful. Good job on that one, Marvel.

She resembles the old Thor

The old Thor’s long blonde hair continues into the new Thor, as she will also have signature blonde hair like the Thor she follows.

Old Thor isn’t “worthy” to pick up the hammer

But don’t skip ahead, because the build up of the new Thor’s reveal is worth the read.

The scripture on the hammer will change

YES! Because that scripture on the hammer was soooo old school — “Whoever holds this hammer, if he be worthy, shall possess the power of... Thor” — the “if he be worthy” will change to “if she be worthy” which is a total win for women and grammar enthusiasts everywhere.