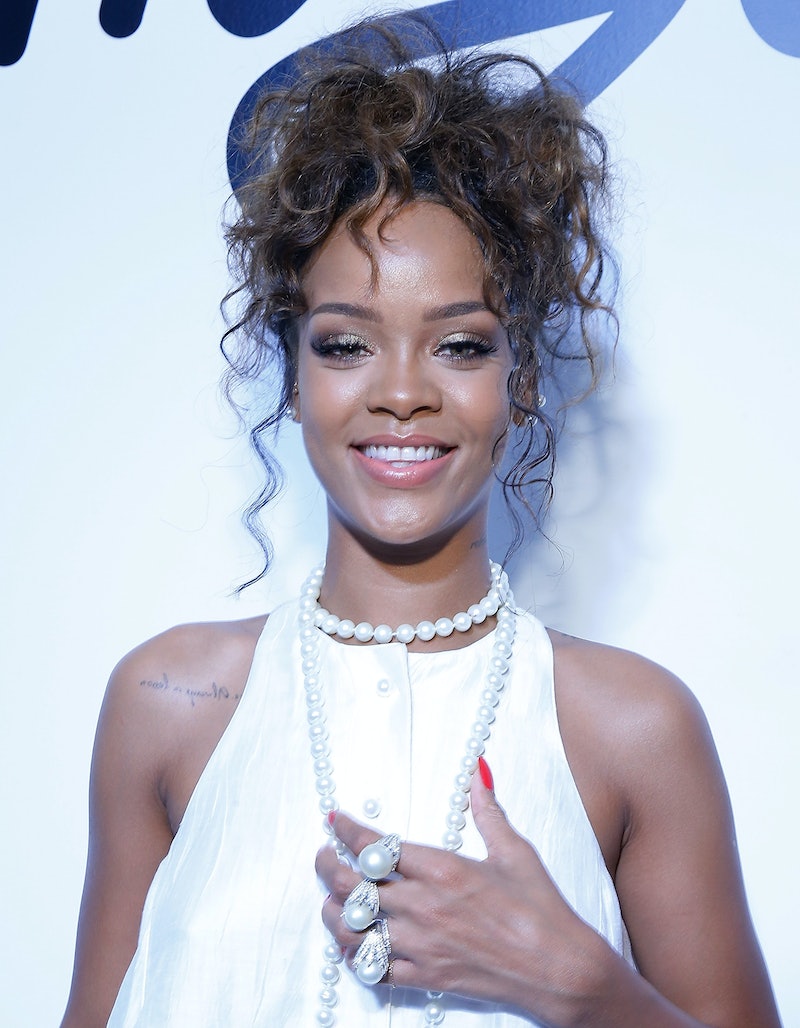 In what is quite possibly the most perfect casting since Aubrey Plaza was selected to be the voice of Grumpy Cat in the upcoming Christmas special, Rihanna might appear in the next James Bond movie. It's nothing more than a rumor of a rumor of a rumor at this point, but is there anyone out there who can imagine a more perfect acting role for someone like Rihanna than as the next Bond girl? Not just because Rihanna wore a see-through dress to a gala, but because if there's any celebrity who exudes mystery, sexuality, and confidence, it's Rihanna. And practically any Rihanna song would make a great soundtrack for a James Bond movie. In fact, half her songs are perfect evidence for why she'd make a good Bond girl to begin with.

According to Wikipedia, a Bond girl is defined as "character (or the actress portraying a character) who is a love interest of James Bond in a film, novel, or video game... There is no set rule on what kind of person a Bond girl will be or what role she will play. She may be an ally or an enemy of Bond, pivotal to the mission or simply eye candy." If you examine Rihanna's lyrics, they tell a familiar story that many Bond girls find themselves cycling through in your typical Bond movie. Let's take the narrative of the alluring woman that James Bond meets and tries to help only to later discover she was working for the bad guys all along, shall we?

1. Funny you're the broken one but I'm the only one who needed saving.

James Bond is your pretty typical brooding male hero with all the charm and the skills to distract us, and himself, from the fact that he has a pretty messed up past. And there's always a hint of vulnerability in the girls that he meets that entices him to want to help them.

Sometimes, the Bond girls begin with the revelation that they're working for the bad guys, but paint themselves as the victim. Maybe the bad guy is blackmailing them, maybe the bad guy has a gun on their family, or maybe they have Stockholm Syndrome, but they are occasionally reluctant villains who need a guy like James Bond to help them break free.

3. I'm the question and you're of course the answer.

It doesn't take long for the game of seduction to begin. After all, this beautiful woman is nothing but a mystery wrapped inside a riddle and only James Bond can put this puzzle back together.

4. Got you where you wanna go if you know what I mean.

"Shut Up and Drive" is one long allusion to sex using car imagery. Sorry if I spoiled that for anyone. Most Bond girls have a raunchy name that ranges from the subtle to the don't-let-your-children-watch-this. Pussy Galore, anyone?

5. I'll tell you all my secrets that I'm keepin', you can come inside. And when you enter, you ain't leavin', be my prisoner for the night.

Next comes the reveal. Just when things are really heating up between James Bond and his love interest, she reveals herself to have been working against him this whole time and he's left in a sticky situation. Sometimes in more ways than one.

Like some kind of switch has been flicked, if they seemed vulnerable-yet-dangerous before then they really crank it up to 11 when they don't need to pretend anymore. Rihanna in particular would bask in being the bad girl we all know and love.

However, just because she's been revealed to be a villain doesn't mean the Bond girl is any less glamorous and sophisticated than she was before the reveal.

8. My runway never looked so clear, but the hottest bitch in heels right here.

To be honest, this lyric applies throughout the entire movie. That's why James Bond took such notice of her in the first place. That Rihanna reign just won't let up.

9. Easy for a good girl to go bad and once we gone best believe we've gone forever.

For some Bond girls, however, their feelings for James Bond overcome their alignment and they begin to doubt that they're doing the right thing, even if it seems like it's too late to turn back.

10. Then I get a scary thought. That he's here means he's never lost.

Helping them along on their journey back to James Bond's side is the fact that the villain betrays them or attempts to dispose of them in some way, making them realize that James Bond is the only guy they've ever been able to trust. Sometimes, this ends in their death and sometimes they get to be James' hero.

11. We found love in a hopeless place.

Then James and his latest Bond girl fall madly in love until the next movie in which he falls for someone completely different. Rihanna has a song or lyric for every James Bond movie under the sun, so it's really shocking it took someone this long to put her in one.