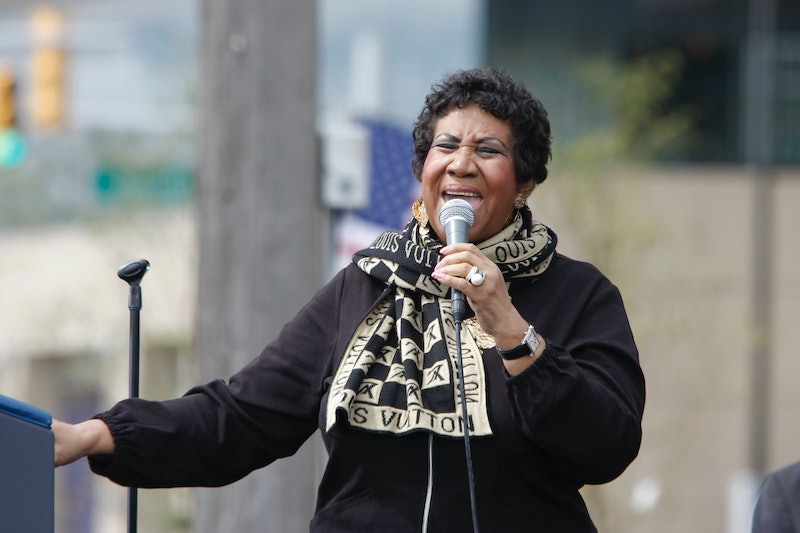 Songs set for the album include: Gladys Knight's "Midnight Train to Georgia," Barbra Streisand's "People," Whitney Houston's "I'm Every Woman," Supremes' "You Keep Me Hangin' On," Etta James' "At Last," Alicia Keys' "No One," Gloria Gaynor's "I Will Survive," which will incorporate Destiny's Child's "Survivor." WHOA. If that wasn't convincing enough to be standing at the music store to buy the album the week before it comes out — do people still do that these days? — then give Franklin's version of Adele's "Rolling in the Deep" a listen. Trust me, you want to hear this... "Ain't No Mountain High Enough" is incorporated into the end, and I passed out when I heard it.

But as a huge fan of "diva classics," I can't help but feel like there are some real crucial songs missing on this list. Don't get me wrong, I am counting down the days until Oct. 21 so I can download the album, but where is Mariah? And Christina? And Celine? Here some songs that should be on Aretha Franklin Sings the Great Diva Classics 2 if that ever happens.

You can't have an album of "diva classics" and not have Mariah. It's a rule. Somewhere.

Céline Dion's "It's All Coming Back To Me Now"

Can you imagine Franklin's take on the "baby, baby, baby, when you touch me like this, when you hold me like that," lyrics? Note: super weird music video on Dion's part.

"Beautiful" with an incorporation of Franklin's "(You Make Me Feel Like) A Natural Woman." That's all I want.

Just because Aretha would serve this song up on a silver plater.